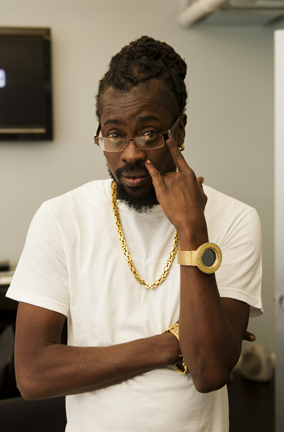 Walking into MBK Entertainment offices in New York City on one of the hottest days of the summer, anxiety reached my sweaty palms and my lips were getting drier by the second. International reggae star, Beenie Man was on his way and ready to answer questions. With his Visa reinstated for the United States and new music in tow, getting press for his U.S.A. comeback was on his mind. I grew up listening to Beenie Man, singing along to “Sim Simma who got the keys to my beema,” and now I was given the opportunity to have a conversation with him. When he finally arrived the air conditioning finally reached the anxious nerves and cooled them down big time. He began to tell Parlé Magazine about his return, the new music, his shows in Africa and about his statement “apologizing” for his homosexual lyrics.

Parlé Magazine: You have been missing from the United States music scene, what have you been up to?
Beenie Man: I’ve been out of the United States for about three years and throughout those years I been across the world and back. I’ve been from East to South Africa, Europe, Japan and the Caribbean. I’m still working and making hits.

Parlé: I know you have some new music lined up for us, what can we expect?
Beenie Man: I’m coming out with a new song, it’s called “The Summer is Here” and after that I’m coming out with The King of Dancehall album. At the end of the year I’m going back to Europe and I’m back in the United States.

Parlé: How does it feel to be back?
Beenie Man: It always feels good to be here. Always.

Parlé: You came here to do a show over the weekend, you felt good on the stage?
Beenie Man: What?! I felt wicked! The people were hungry so all I had to do was feed them.

Parlé: Let’s switch gears real quick, did you feel pressured to put that statement about your homosexual lyrics (find the statement below the interview)?
Beenie Man: I always feel pressured because we have been getting into the same fight for like seven years now and we signed a paper to say that we’re not singing those songs anymore but we were still getting the fight. I think they wanted to hear personally that’s why I released the statement. People need to realize that we sing songs for people no matter race, creed, color or sexuality because it’s not my business. My business is the music and I am here to entertain people.

Parlé: Do you think other artists should follow in your footsteps?
Beenie Man: I wouldn’t want anyone to follow in my footsteps, I would like for them to follow themselves and have some sense. They should know, you’re not only working for you but for the people who work with you.  If you’re going to bring down yourself then you’re bringing down a lot of people like your family.

Parlé: How do you feel about your fellow artists commenting on your statement?
Beenie Man: That was going to happen and you always expect that to happen because people always want to beat you down when you’re always on top. What I do care about is that my fans, the media and the government of my country appreciated what I did. What a small minded man thinks about what I have done is not my business, I deal with majority, I don’t deal with minority.

Parlé: Did you feel like you were carrying dancehall music on your back?
Beenie Man: I am the King of the Dancehall, put it like this I am the Jay-Z of dancehall.

Parlé: What keeps you motivated to make music?
Beenie Man: The people are still supporting and showing love. When you still have fans out there, millions of people are depending on you to keep this music alive. People call me legendary but things that I have done is legendary. I’m not a legend but my songs are legends.

Parlé: When you started your career did you think you’d be this big.
Beenie Man: Seriously, [Laughs] I started out crying, that’s the day I was born.

Parlé: With the way dancehall is changing, do you think you can still fit in?
Beenie Man: I’m the one singing, “I’m drinking rum and redbull,” didn’t that fit in? I’m up there with everybody.

Parlé: True. True.  Are you helping with the release of any new artists?
Beenie Man: I’m always helping, my company releases the artists because I’m an artist myself. I do not release artist to own artist, I give them the opportunity to be a superstar. I’m always mentoring new artists and pushing them to success. I have two artist Kontane and CG and I’m going to sign my daughter.

Also Check Out:
Warryn Campbell – The Industry Heavyweight
Samyr Laine – Greatness Can Be Accomplished In The Classroom & On The Field
Immortal Technique – Perfecting The Art of Rap
Radio to Production, DJ Spinz, Keeps the Hits In Rotation
Eric Benét – Getting Better With Time