Barely in his mid-twenties, Zack O’Malley Greenburg seemingly attracts success with everything he touches. I was first introduced to him as an author, having shortly after the paperback release of his first book, Empire State of Mind: How Jay-Z Went From Street Corner To Corner Office. The book, which I went on to review is very much worth the read and quite impressive for a debut, so I was intrigued to find out more. Didn’t take long to figure out that Greenburg has a ground breaking history in Hip-Hop, thanks in part to his position as a writer at Forbes Magazine. When you talk about Hip-Hop Cash Kings, you’re talking about a list that Zack O’Malley Greenburg helped create from the beginning. And the most recent list, topped by Dr. Dre and since quoted by tons of sites, artists and publicists alike was put together completely by Greenburg. So it makes sense that when Penguin Books was looking for someone to write a business biography on Jay-Z, they’d reach out to the expert. I recently got an opportunity to catch up with the expert myself. We talked for an hour about writing, Hip-Hop, and even his starring role as a child in a major feature film—told you he finds success in everything he does. Not often that you get it direct from an expert, check out our interview for the complete story…

Parlé Magazine:  Let’s get right into it, how’d everything come together for Empire State of Mind? How’d you become the choice to pen a business biography on Jay-Z?

Zack O’Malley Greenburg:  The way the book came about was I had been writing for Forbes for a couple years already and a couple editors at Penguin came across some of the stories I’d did about the business of Hip-Hop, particularly the Hip-Hop Kings packages I had done. I did profiles on Akon and 50 Cent and I think what happened was they wanted a book on Jay-Z, a business book and I think they just googled business and Hip-Hop and my articles for the Cash Kings package was the first thing to come up. One of the editors emailed me and I remember I almost deleted the email when I got it because it looked like some scam, something like ‘book project opportunity’ in the subject. And I kind of took a second look and realized that it was an editor from penguin. Of course I had to do a full-fledged outline but basically they invited me to do this book on Jay-Z.

Parlé:  Was the subject of the book always supposed to be on Jay-Z or did you have options?
Greenburg: Actually when we first talked about it, we talked about doing it on Jay-Z or Diddy, we had some conversations, the editors at Penguin and I, and we settled on Jay-z. We thought that might be a better story though Puff’s story of course is incredible, we thought that it was more compelling because Jay-z came from nothing whereas Puff came from more of a middle class home. For Jay to come from where he was to become what he’s become is amazing. That was before Ciroc took off and Diddy became the most successful Hip-Hop artist, (laughs). He’s actually worth more than Jay-Z is. 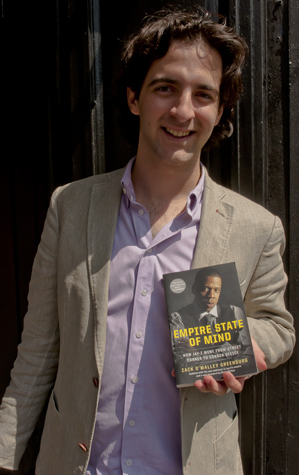 Parlé:  So when did you start working on the book?
Greenburg: I started it in the Fall of 2009 and finished in the Summer of 2010. It was out in Spring of 2011 and then the paperback came out in Summer 2012. I updated a couple chapters and Steve Forbes wrote a foreword for the paperback. I thought was pretty special because of course Jay-Z wouldn’t talk to me but he did talk to Steve Forbes and so Steve shared some of the insights that he got.

Parlé:  Speaking of which, you explain early on in the book that Jay wasn’t interested in taking part and he didn’t speak with you or anything, did that have an impact at all on whether Penguin wanted to move forward with the project?
Greenburg:  No, they were totally on board to do it regardless of if he was on board or not. Of course we really wanted him to be involved but the conversations that I had with John Minelli and Jay-z’s team, they were kind of interested but they really wanted to do it their way and they wanted compensation. There were some vague conversations of ‘drop this book deal and maybe we’ll let you ghostwrite a business book about Jay,’ but I guess there weren’t enough assurances for me and the team at Penguin and I were really dedicated to doing this as a neutral third party thing, not like a ghost writer type of thing. We wanted to take a neutral look at his rise to the top as a business man and we all thought that he would come around but he never did. I wonder if we had a little bit longer if he would eventually come around. I think in a lot of ways the fact that he didn’t come around made it an interesting book because it forced me to dig to find people that he had done business with way back. If it had been an authorized thing he probably would have suggested that I didn’t talk to those kind of people and he probably would’ve been a little bit unhappy that I did. (Laughs). I think in many ways it’s a better book because of that.

Parlé:  Have you gotten any feedback from that camp since its release? Do you know if he read it?
Greenburg: I offered to send over a couple copies before it released. And his publicist said ‘thanks,’ but there has been no official reaction. Although I’ve heard from people that know him that he’s read it, but apparently he told them that he didn’t. But they think he did anyway.

Parlé:  For the paperback release you have Steve Forbes writing the foreword, how’d that come about?
Greenburg:  It was pretty straight forward, I emailed his secretary. Steve had given me a book quote for the original and I said, ‘Steve gave me this quote, and for the paperback I was wondering if he could do a foreword.’ She said, ‘let me check.’ A couple days later she said, ‘yeah he’d love to. Let’s arrange a meeting.’
So I sat with Steve and he was like, ‘Zack, what do you want me to write?’ (Slightly mimicking Steve Forbes voice and laughing). The tables had kind of turned a bit, the boss asking me what I wanted him to write. But I said, ‘just your experience with Jay and what your observations of him were when you met with him and Warren Buffett in Omaha a couple years ago. What you thought of him as a businessman, and any kind of personal observations would be so valuable.’ That’s the one thing I wanted to have in this book that I didn’t. And what better place for it to come from than Steve Forbes himself. He was very gracious. He did a great job. Very down to earth. I give him a lot of credit for it. Somebody who’s really, I mean obviously not the world’s foremost Hip-Hop authority, but he recognizes the business side of it. And he’s able to bring his business savvy and insight and apply it to areas where one might not think that he’s thinking about but he does so with rigor and intelligence and I think he brings a really cool perspective to the book.

Our Review of the Book:  Empire State of Mind – Jay-z business biography review

Parlé:  You talked to a lot of people for the book, who would you say was the most insightful in helping you get into the mind of Jay-Z?
Greenburg: There were a lot of really great and insightful people but I think one of my favorites was DJ Clark Kent. If you look at the intro to the book and kind of the outro, it’s bookended by this meeting I have with Clark Kent. In the beginning I’m stuck in the subway going to meet him at some Applebees way the hell in Brooklyn and I’m meeting him and drinking margaritas. And in the end, we’ve totally demolished these margaritas, its cold, the sun is going down, it’s the middle of winter. And he’s drifting on Jay and he says—this is one of my favorite lines and I knew it when he said it—he says, ‘when people look back, they’re not even gonna call Jay-z a businessman or a rapper or anything, they’re gonna call him a Jay-z cause he was so unique with what he did.’ I thought it was such a cool way to end the book. He said a lot of insightful stuff, like why Jay-Z and Dame broke up, about Jay-Z’s ambition and how it was kind of cultivated by growing up in Marcy, the idea of living in a situation where you have so many people on top of you and feeling like you need to get out. Just different things like introducing Jay and Biggie, a lot of good stuff.