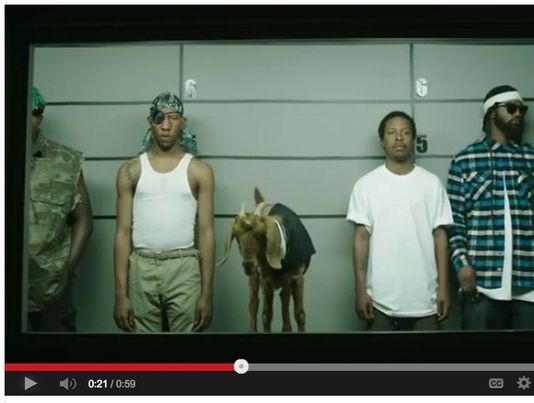 In this day in age, I am baffled at how a major corporation like PepsiCo could green light a commercial that is stereotypical, insensitive and outright racist. Though the company has pulled the commercial and apologized (“We apologize for this video and take full responsibility. We have removed it from all Mountain Dew channels and Tyler is removing it from his channels as well,”), the damage has been done, the stereotypes have been reinforced, and the images displayed have been unjustifiably edged in the minds of many.

So thank you, PepsiCo. Thank you for thinking that it would be funny to shoot a commercial of 5 Black men, dressed as prisoners, in a police line-up with a talking goat. This is something that I will be sure to show my sons. Thank you, PepsiCo, for thinking that it would also be funny to add a White woman to the equation and portray her as a victim who has been beaten and battered, a victim who is presumably intimidated, threatened, scared, and confused. I’ll be sure to pass this one on to my daughter. Last but not least, thank you, PepsiCo, for peeking my curiosity, as I am still puzzled and a bit confused. Are we to assume that one of the Black men assaulted the White woman, or was it the goat? Who could tell the difference, right PepsiCo?

These days, giving a rapper or an artist full creative control over the direction of a product is simply idiotic. With that said, I am no longer holding these artists accountable. Why? Because anytime an artist crosses the line, they use their “creative rights” as an excuse. They hide behind this excuse and we are supposed to understand. In addition, when these artists do respond, it ends up making the situation worse.

Tyler “The Creator” is a rapper and the creator of the commercial. He stated that he “didn’t intentionally mean to offend anyone” and I truly believe that he didn’t. I mean come on, how many 24 year-olds wake up in the morning and actually think about the history of racism here in America? How many of them wonder about African-American men and the concrete long standing stereotypes that an advertisement like this helps to perpetuate? How many young rappers (signed and unsigned) do you know that are sensitive to women’s issues like rape and abuse, and how many give a damn about the symbolism of what someone like a Rosa Parks or a Emmett Till represent to the African-American community? I no longer expect artists to give a damn about any of this. However, at some point in their lives, I’m sure that they will.

When I look at PepsiCo’s response, I can not help but wonder when something like this will happen again, because nowhere in their response has PepsiCo truly addressed the issue of preventing this from happening again. For example, let’s start with the first two words, “We apologize.” The only reason why PepsiCo apologized is because there was an outcry. How about discussing why and how you were put in this position where you had to apologize. If the outcries were minimal, these images, in PepsiCo’s own world cultural view, would be acceptable and would remain edged in the minds of their consumers. Next PepsiCo states, “We take full responsibility.” PepsiCo executives have no choice in this matter. Also, taking full responsibility does not mean that this will not happen again. This is what the public needs to hear, that something like this will not happen again. PepsiCo ended with the statement, “We have removed it (the video) from all Mountain Dew sites.” So what! Unfortunately, these images are out there forever, you cannot remove it from the hundreds of websites and channels on the Internet.

If PepsiCo is serious about preventing this from happening again, PepsiCo should invest in outside agencies and test the public’s response. When any company is marketing a product to a certain demographic, it should at the least try to find notable scholars who are well versed on the sensitivity of a given race. Is this not Marketing 101? Shame on you, PepsiCo! Shame on you, for yet again perpetuating hurtful longstanding stereotypes against one of your biggest consumers.