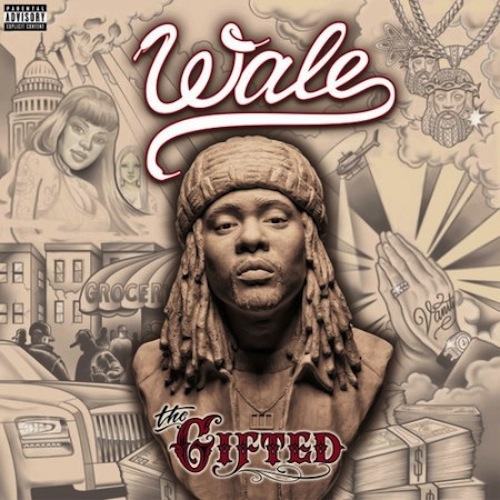 Wale decided to elevate his approach for this third album, The Gifted. While he has been a potent lyricist from day one with a club friendly personality and a penchant for finding the best in women of all psychographics, Wale has evolved into somewhat of a lyrical counselor, speaking on issues that Hip-Hop enthusiasts can appreciate. On The Gifted, for the first time he seemingly completes his mission without coming off as a preacher or an awkward messenger, acknowledging it on “Gullible” saying, “I just want to talk to my people without preaching.” He does so effortlessly and the overall product is seamless.

Where Ambition failed was with the initial oxymoron that was a rapper who began his career with conscious mold becoming this member of a Rap crew that rhymed about Maybachs and the finer things in life. It simply wasn’t believable for half the project and didn’t feel authentic for the other half, almost like Nas during the “Oochie Wally” phase. Wale was able to find success thanks to his lady friendly anthems and he created the buzz for his latest album thanks to the same formula. The infectious hit, “Bad” featuring newcomer Tiara Thomas grew on fans and the folks at urban radio, helping create a lead single from what was originally a mixtape buzz single.

The Gifted begins with a string of pleasant concept tracks. The production is melodic enough that the listener is engaged and the lyrics are developed that they require much effort for digestion. It’s the perfect combination Wale has searched for throughout his career. The producer names on the project don’t necessarily stand-out at first glance besides a track featuring Just Blaze, but the project sounds just right with Tone P, Sam Dew, No Credit and even Tiara Thomas, who produced the single “Bad,” at the boards.

Those looking for party records and tracks that tend to appeal to what has dominated Hip-Hop radio won’t find many options on The Gifted. There is “Clappers,” which features Nicki Minaj and Juicy J, as well as “Rotation” with 2 Chainz and Wiz Khalifa, but those tracks serve their unique purpose on the project and he moves on. He has left the expected Maybach Music mold behind, reserving the frivolous tracks for Meek and Ross. Most of the tracks on The Gifted require some level of thinking. They are set up to almost serve as a conversational piece for the urban community. The instrumentation is just an added plus.

Stand out tracks include, “Love-Hate Thing,” his second single,”88,” “Gullible,” “Black Heroes” and “Heaven’s Angels,” which features MMG counterpart Meek Mill. I was even pleasantly surprised by the “Bad” Remix, which features Rihanna. I’ve longed for the days when artists would actually remix records and not just create new verses talking about the same thing using the identical production. Wale changes the production and finds a way to involve Rihanna on the track by doing more than just giving us the hook.

Wale isn’t getting much praise among the Hip-Hop community, but it’s hard to understand how a true Hip-Hop fan would be disappointed in this product.

It’s true what they say, can’t please everybody. Seems especially true for The Gifted.

PS – if the Wale you seek is the Wale of Ambition, then the bonus deluxe CD from Target is for you. The four tracks are totally opposite from what he’s created on The Gifted and for the most part it’s totally unnecessary, but everyone has their ratchet days…

The Gifted receives a PARL