Skip to content
Home » Kevin McCall: From Behind the Scenes into the Limelight

Singer Kevin McCall Hops Into The Limelight – Our Interview

As with many of tomorrow’s music superstars working behind the scenes is just a pit stop on the path to major success. Singer/songwriter Kevin McCall is no exception.  Finally stepping out from behind the curtains he’s showing the world exactly why now is his time to shine.  Widely known as the songwriter of choice for R & B megastar Chris Brown, McCall, also known as “K-MAC,” is determined to have the world singing to his own tunes. Having penned, produced, and collaborated on some of recent music’s most celebrated songs Kevin has released his new single “Naked” as a sample of what’s in store for his upcoming EP. Check out what he had to say about his sound, the revival of R & B, and taking music to the next level below.

Parlé Magazine: For those who are unfamiliar with your career tell us how you started in music.
Kevin McCall: I’ve been singing since I was a kid. I grew up in church singing in the choir and around the house. That’s pretty much where I guess I learned music theory if you will. I also come from a family that made music so it all started for me back then.

Parlé: I also understand your family has an extensive background in both music and football, how did they feel about you choosing music over sports?
Kevin McCall: That was initially due to my dad’s stance.  I never really got to tell his side of it but his stance was that I was following a career where statistically you might not make it.  You know this industry is flooded with people doing the same thing and my dad didn’t want me to put all my eggs in that basket, he wanted me to pursue my education. He also wanted me to maintain a job while I completed my degree but unfortunately the economy had changed and I couldn’t find one. So I did what I had to do and fast forward now I’m doing well with music and the tables have turned to where my dad was unemployed for even a longer time than I was. Since then we have gotten closer and I showed him the importance of following your dream despite what people tell you and now he’s following his dream of being a head coach of a football team.

Parlé: It sounds like you may have had a very structured upbringing, how would you describe your childhood growing up surrounded by music and sports in L.A. Watts, California?
Kevin McCall: It was pretty good. It wasn’t rough at all. I never knew we were lower middle class or lower class always thought that we were just rich (laughs).  My mom always had my Capri Sun and kept food in the fridge, she always made a way, you know. Also, my parents did a good thing by moving out of the hood which kept me out of trouble even though I spent a lot of time in Compton or the Watts visiting my grandmother or friends.  That’s also a big part of why my personality is the way it is because I was able to see different views on life between living in Gardena and going to a better school outside of my neighborhood, which allowed me to focus on sports and other outlets instead of being in trouble. 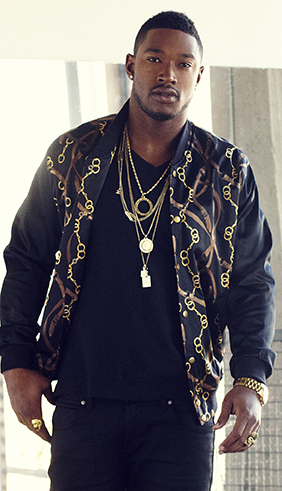 Parlé Magazine: Possibly due to that focus you were also one of the lucky ones to get a football scholarship to school hinting that you had real talent. Why give up on that for a career in music?
Kevin McCall: I would say my love for music at that time and in college was more of an outlet than a job and that’s what swayed it.  With football you eat, sleep, and breathe football. You get up at 6am for workouts and study films in the evening and all other kinds of things are planned for your life on top of classes and I didn’t play video games so I did music. In those four years my love for music just grew and grew and I realized that there were politics in football that I didn’t want to deal with. Music was just fun to me and even though there are politics in music I’d rather do music because I feel like this is what I was made to do.

Parlé Magazine: Usually when people realize what it is they want to do they hustle to try and make their dreams come true, what was your struggle during that time like?
Kevin McCall: Very frustrating!  Sometimes very saddening when doors are closed in your face and you have your friends saying how great you will be or saying “Man, you’re the next Chris Brown!” But having people in your corner to push you is important, I think that’s what kept me going.  All of my family and my manager were very supportive and it pushed me to utilize my network from being in a Frat as well as continue to be social with other musicians from bands from church and etc. I kept trying to be in the right place at the right time.

Parlé Magazine: And when did all this hard work pay off for you?
Kevin McCall: I got the big break when I actually had a chance to meet Chris (Chris Brown). I actually met him through two different people and the second time I kind of pinned him against a wall and made him talk to me.  Not physically of course (laughs), but one of my frat brothers  by the name of Big Mijo  invented crump dancing and Chris loves crumping so he introduced me to him.  The other time I met him was through a songwriter I met on MySpace by the name of Andre Merritt who wrote for Rihanna and Chris Brown and he introduced me to him and allowed me to say what I needed to say to him. I just found a way to stay where I needed to be and now here we are.

Parlé Magazine: You’ve since went on the pen many hits for Chris over the years. Any of those particularly a favorite project yours?
Kevin McCall: Hmmm all my favorite songs with him are all the songs we worked on together (laughs).  Nah but do I love a song Tha Bizness produced called “Life Itself.”

Parlé Magazine: In your array of talents you also do some producing work as well?
Kevin McCall: Yeah, I sing and do a little rapping.  I can do it all but I like to work with other producers more because when you work with them you tap into something you don’t have.  I work really well with Tha Bizness who also produced No Bullshit as well as a producer named D Miles and another one named Preach.

Parlé Magazine:  Being multi-talented do you find yourself leaning towards one or the other talents more than singing?
Kevin McCall: I would probably do the least rapping, it’s just for fun.  Because I have so many different sides to me I guess rapping is just a way to be clever and creative and express my rough around the edges swag. At the same time I love to sing and write so I’m more focused on those two.

Parlé Magazine:  Songwriters always tend to collaborate with some of the best in the industry, is there someone out there you would like to write for or collaborate with?
Kevin McCall: Yeah, I want to work with Kanye and Jay-Z and Andre 300 before those two. Who else… Marsha Ambrosia and Frank Ocean, he’s dope. That’s just a few.

Parlé Magazine:  Would any of these names or other hitmakers be featured on your latest mix-tape or new EP?
Kevin McCall: The new music I’ve been working on has some alternative music with Marilyn Manson, a ton of music with Gucci Mane. I’m working with a new writer named Constantine and also some new stuff with JoJo.

Parlé Magazine:  All of those are very different artist, how does this blend into one style. What you will be doing for music?
Kevin McCall: I’m still going to make good R & B music. There are people who love R & B music just like I do and they want to hear it. Street guys who want to hear some Maxwell or Nate Dogg I have music for them and for girls who don’t want to hear about sex or nothing I have some Stevie Wonder style music for them.

Parlé Magazine:  It’s been said that R & B as a genre is dead, how do you plan to revive it with your music?
Kevin McCall: Collaborate with people and not be afraid to open myself up and learn to create something new. I think people need to start embracing each other more that way it can grow. It would be like a melting pot of talent and ideas old and new school.

Parlé Magazine:  And when can we the fans get a hold of some of these melting pot ideas and new music?
Kevin McCall: (Laughs) Soon man very soon
Kevin McCall released his new EP, Sextape on June 26th.  Simply put, it’s a pocket full of hits.