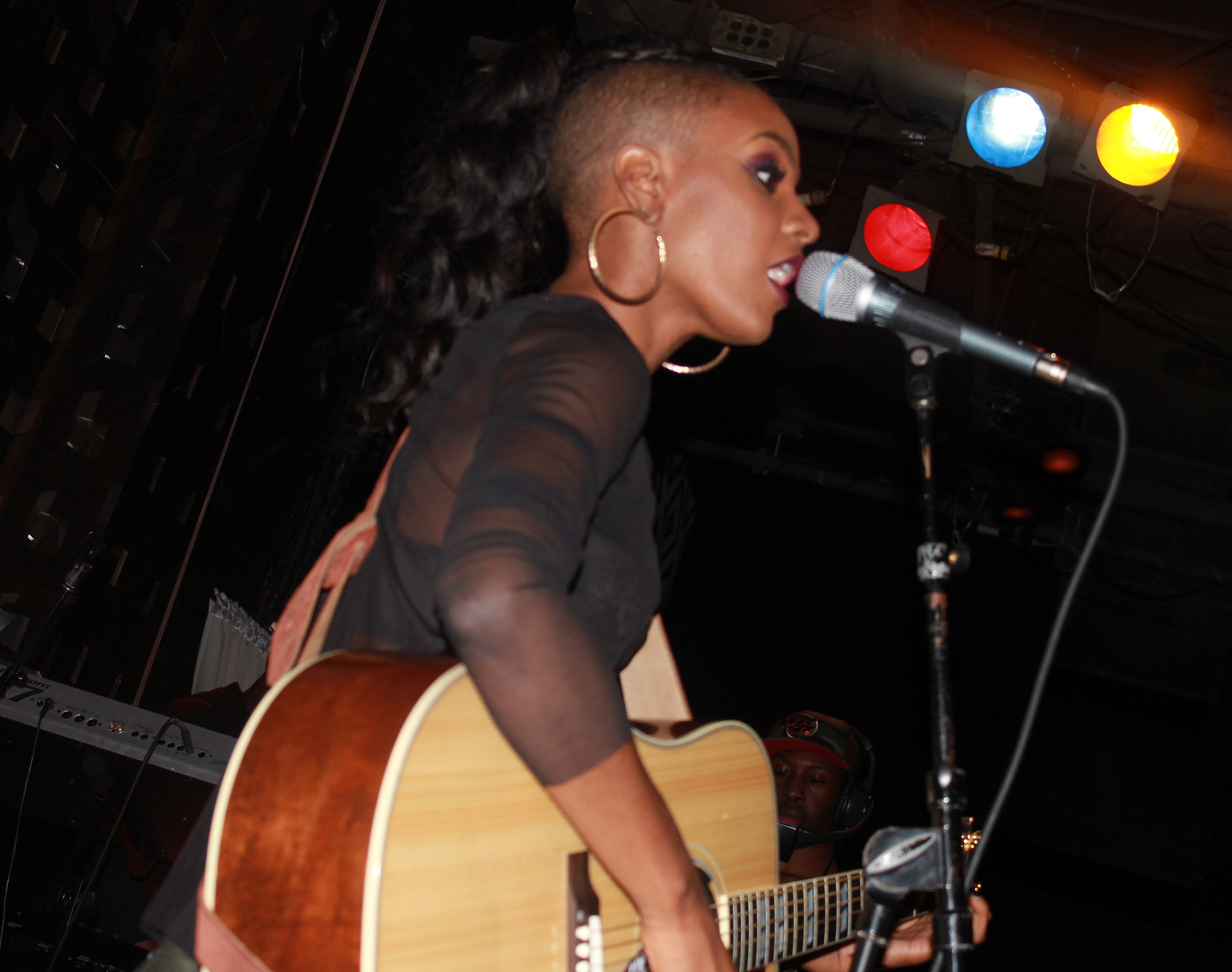 Hot 97’s “Who’s Next” showcase couldn’t have a more appropriate name. These artists are definitely next and “not because they’re dope or simply have a lot of You Tube views” as explained by the night’s host Shani Kulture. “But because they’ve put in the work in the studio and the streets.” Thursday, September 17th at SOBs, its regular home, Hot 97’s “Who’s Next” took place. Tiara Thomas and August Alsina took over the stage but not before showcase guests Charlie Red, Mela Machinko and Ms. J Lynn performed. Co-Hosted by Hot 97’s Rosenberg, the show was bound to be lit, the crowd was pumped up by DJ Juanyto who was playing all the good old Hip-Hop joints, which helped prep the crowd for the performances to follow.

The first to go was female emcee, Ms J Lynn. She had a seemingly California-inspired fashion sense and a flow like Busta’s, along with a vision and voice like Lauryn Hill and rapping style similar to Eminem’s. A dynamic combination of style and energies focused on unity and female empowerment. She definitely brought something new to the stage. 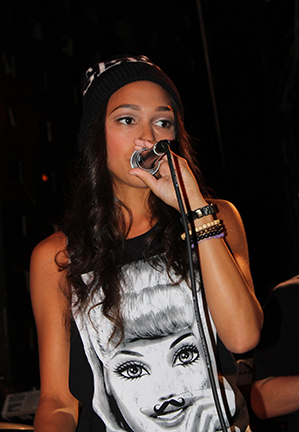 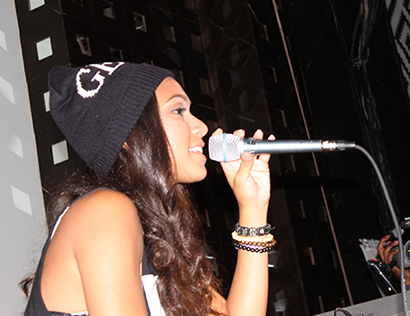 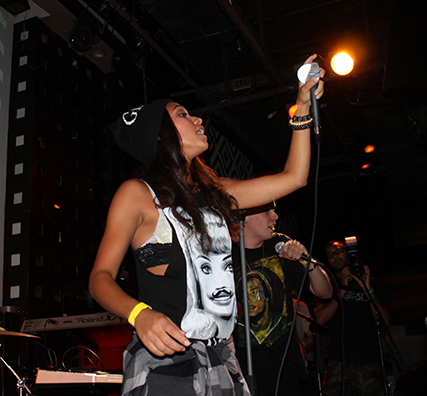 Next was Mela, a very soulful and eclectic act. She started off with a song called, “Introduce Myself,” one of several on a concept album called, Hov Said it Best.  The project also includes  a rendition of “Song Cry” (written from a females perspective). Mela’s style is soulful and straight forward. Her voice, strong and present.

Charlie Red was the last performer of the showcase artists. The band, titled after just one member delivered a rock star performance and had the crowd going wild. Vulgar at times, which made for great energy and a provocative performance, Charlie Red performed songs from their newly released ep, Muse that they mentioned can be purchased on iTunes. 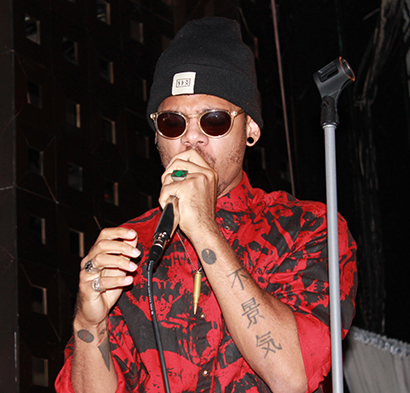 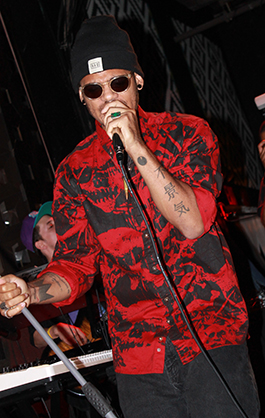 Following up was the much anticipated, “I Luv This Sh*t” singer, August Alsina. Once touching the stage the ladies went crazy. He performed songs from his ep, Downtown: Life Under the Gun, singing “Suit and Tie,” his version of the banger, while opening his shirt, revealing his tats and holding hands with his lady fans in the audience, he definitely worked the crowd. He also brought out fellow New Orleans native, Kidd Kidd to perform, “Downtown.” The two effortlessly brought NOLA to NYC. 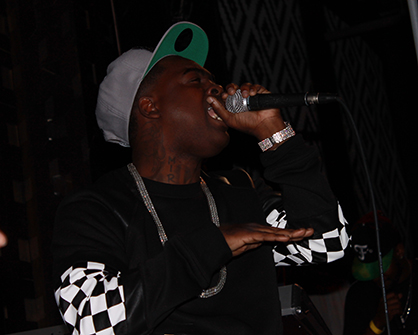 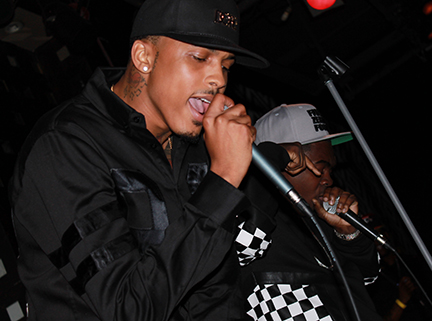 August’s performances are sexual and give you an old school 90’s R&B feel, mixed with some uncensored new agedness. He shared that he does what he does for anybody in the struggle and then smoothly moved into his hit, “I Luv This Sh*t.” The venue then transformed into the club as he jumped from one end of the stage to the next, all the way turned up, clearly, he luvs this shit— August even initiated a small twerking contest, where he pulled three fans from the audience saying, “now if you can’t dance don’t get up here.” This was a show in its self as he sang and danced erotically around three hot girls, the crowd loved it. And then…he was off.

Last but not least for sure, was singer-song writer Tiara Thomas. She hit the stage with “F*ck Sallie Mae” first, a tune that I’m sure many college students can relate to. One line goes “I got a dope apartment, but it ain’t even furnished, cause I got bills to pay, I just wanna say fuck Sally Mae.” – Hey, I hear her.

Her voice is so distinct and does so many tricks, her flow is stupid sick and she plays guitar too! The next song she performed was “I Wanna” and then what we’d all been waiting for, “Bad,” her original self-written version of the hit. For those that don’t know she produced the Wale song and came up with the hook. Before going into this she shared with the audience where it was written—her dorm room and recorded at her friend’s house. The crowd participation was real as everyone sang along for the entire song, singing and rapping parts. The last song’s hook that she performed was ill and got the crowd pumped—“I just wanna smoke weed legally…” Tiara added some small talk in between her music but she mostly delivered her unique voice, rare energy and dance moves.

Dope show all around.