Skip to content
Home » Christmas Fire Sale! Selling off the Meaning of the Holiday 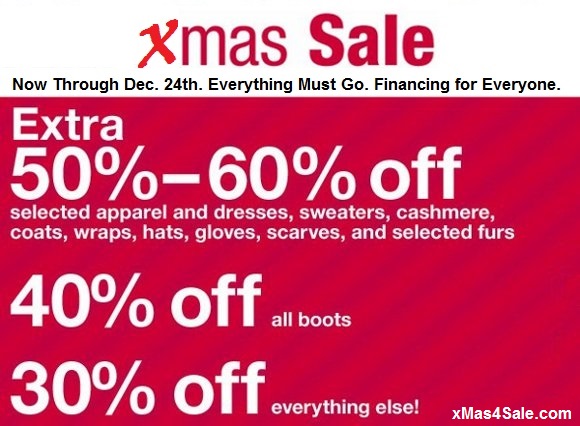 The notion that Christmas has been reduced to a commercialized driven enterprise focused on improving corporate bottom lines versus the celebration of anything meaningful is not new. For years, people have complained that the “holiday” season has become a drain on their emotional and financial well-being. Many feel as though retailers are selling off the meaning of the holiday. Most of the season is spent on trying to find the perfect gift for someone in place of spending value-added time with him or her.  However, it’s the consumer who is largely responsible for the deterioration of the meaning of the holiday season.  Each year as shoppers flock in droves to spend their dwindling resources, it’s ultimately an act of acquiescence to the inducement of  effective corporate marketers.

According to the National Retail Federation, last year holiday shoppers spent $579.5 billion. On average, holiday sales have steadily increased 3.3% for the last 10 years.  For some retailers, the holiday season can represent as much as 20-40% of annual sales. As recently as 2012, holiday sales made up 19.3% of total retail industry sales.  Given these staggering financial figures, retailers of every size look to the holiday season to launch aggressive Christmas sales campaigns to the public. Although the rationale behind these business decisions is clear, it doesn’t mean that commerce should be the motivation behind the average person’s view of Christmas.  Each person should embrace the holiday season in a way that reflects his or her personal value system.  This will ensure they feel a sense of connection to the celebration of Christmas  and the act of gift giving.   If one merely gives a gift because they feel compelled to do it, then the gift itself may not be an accurate representation of the spirit of the holiday.  Instead, the gift is merely a product bought due to its commercial success and the human impulse to satisfy it.  In the end, what’s left is a sense of momentary satisfaction, yet no lasting legacy of kindness and good will.

Consider the original Christmas Story found in the Hebrew bible. On the night of Jesus’ birth, he was visited by three wise men. There are some translations of the Bible that refer to his visitors as Kings, or Magi.   These three Kings believe that Jesus was “the Christ”; the Messiah”; the Son of God.  Therefore when they traveled to see him they brought along special gifts to celebrate his birth.  The gifts they brought were not ordinary presents.  Each gift had extraordinary meaning behind it. The gifts were gold, frankincense and myrrh.  Each were chosen because it symbolized characteristics of Jesus’ future ministry and purpose.

These acts of kindness (and prophecy) are the examples we are to follow in the observance of the Christmas holiday. Gift giving should be a selfless act motivated by a sense of sharing and community. Holiday shopping should not consist of mad dashes to the store or violent exchanges in the aisles as you tussle over sale items with your fellow man.Somewhere along the years we have lost a sense of the purity of God’s initial “Christmas” gift to us. Whether you believe in Jesus or not, the Christmas holiday is still rooted in the “story” of His birth. Thus, observance of it should at least stimulate a portion of one’s holiday actions to reflect it’s original meaning. The lure of time off from work, parties, feasts and commercialism cannot be allowed to drown out the purpose for the holiday. However, each person must decide for themselves on what they truly value.  If the choice is a deeper holiday experience then find time to reconnect with the once peaceful and reflective spirit of the season.  On the other hand, if you choose commercialism and self indulgence then it’s fitting that you remove Christmas from your vocabulary.  Go ahead and fully transition to only saying Merry xMas instead of selling off the meaning of the holiday.

The definition of X is a mark inscribed to represent the signature of one who is unable to sign one’s name.  It’s an unknown or unnamed factor, thing, or person.

Therefore, xMas accurately denotes today’s prevailing attitude about the holiday season.  We no longer identify the meaning of the season with its once pure and humble beginning. Devoid of depth and self reflection, the holiday has been succesfully reduced to a Sales drive. Yet, no matter how much we try to push out any semblance of the true meaning of Christmas, it still doesn’t erase this fact; One night, nearly 2000 years ago, something special happen.  It’s up to each of us to recapture the spirit of that moment, before it’s lost forever.

Do you feel like we have begun selling off the meaning of the holiday?