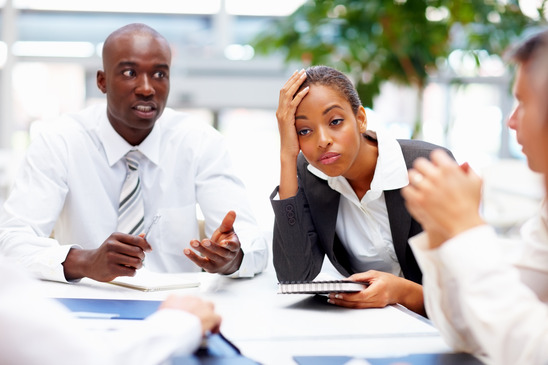 Having been on the short end of the stick—as far as employment is concerned, I can certainly empathize with those who are actively pursuing a job but are unemployed. I know all too well the feelings of hopelessness and despair as days roll by and the due date for bills draw near and the embarrassment of constantly having to ask family members for money just to put gas in your vehicle.

It’s an emotional, mental, and sometimes even physical pain when you’re stressed and at your wits end. Every job seems to deny you—although you meet all of the requirements, and somehow you’re right back on the hunt for a way to generate income. My eldest brother, whom is one month shy of turning 31 and holds three degrees, can sing the same song. He’s been to interview after interview, one application after the next, he’s even passed the tests given on each one. His story ends the same way: denied. Each job seems to give him the same answer after all of his hard work and time spent on completing the tasks given, “Although we are impressed with your background and the education you’ve obtained, unfortunately, we cannot proceed with the hiring process as you are deemed as an overqualified applicant.”

These results are nothing short of disappointing. How, in a country such as America who boasts being the home of the free, heavily promotes education, and promises us dreams of success after our dues are paid, allow the unemployment rate to fluctuate so frequently?

Each and every one of us are after the same thing—money, the almighty dollar. We all want financial stability and it rules the world. A poll that was released by Harris in conjunction with Express Employment Professionals has done nothing but confirm what many of us have already assumed; 59% of Americans who have been out of work for two years or more have given up on their search entirely. The study had also shown that 43% of unemployed Americans, regardless of their unemployment length have stopped seeking job opportunities. Bob Funk, CEO of Express Pros made a statement saying, “This is a tale of two economies; it’s frightening
to see this many people who could work say they have given up.”

“Although we are impressed with your background and the education you’ve obtained, unfortunately, we cannot proceed with the hiring process”

Speaking from a place of experience I fully understand the anger and frustration that surrounds the constant rejection letters from employers. I know the places of desperation and the desire to give up. To be completely honest, the finger could very well be pointed at a number of companies because many do not update their websites on a regular basis and many of these positions have been filled for some time—even before you’ve applied. The survey also unveiled on average that many unemployed persons who are still searching for an open position only spend 11.7 hours a per week looking for a job and 51% of them haven’t had an interview since 2014.

A disappointing one-third of the unemployed population is made up of people ages 18-29 years of age. This means that adults who are just starting out and those that should be well on their way to financial stability, form a good portion of the unemployment population. Not only that, but to touch on those that claim to search for a job 11.7 hours a week, we have to factor in a few things because it is such a low number and those of whom may not understand why that is, don’t consider the fact that many people use the public library and other locations for their main source of internet and the time spent in these locations are limited.

We also have the fact that a good portion of people cannot afford to take public transportation to and from employers each day of the week to fill out applications. Another revelation proved that 22% of unemployed Americans chose to leave their jobs and this increased by 7% from the previous 15% originally reported back in 2014. This issue stretches far beyond anything that this post has already touched on; there are many questions to be answered and one still remains.

Where are these jobs going?