Big Bank Black’s cause is to show forth rap from a different perspective. Focusing on enjoying time rather than serving time, Big Bank Black has catapulted himself to becoming a well known Southern rapper. With roots in Atlanta, Big Bank Black, established his own company Duct Tape Entertainment. Parlé caught up with Big Bank Black to ask him about music and his company.

Parlé: What is Duct Tape Entertainment?
Big Bank Black: It’s an entertainment company that I started in 2005. I started it to get my friends out the street.

Parlé: What kind of things does your company do?
Big Bank Black: Well, we put out the “Try it Out” video. We started it in Atlanta, We haven’t got Def Jam to kick in yet, but when the label does kick in; I know it’ll be really big.

Parlé: What was it about music that made you say it was the route for you?
Big Bank Black: It’s what I know. I got to know it from my city and people I know.

Parlé: How was it working with Zaytoven and Kandi on “Try It Out”?
Big Bank Black: Zay used to cut my kids hair when they were younger. We’re personal friends. I met Kandi through a friend of mine. No one was a stranger.

Parlé: Are you working on an album at the moment?
Big Bank Black: Well, I put out a mixtape, you know. It’s a street album. There is an album that I plan to put out later this year. I’m going with the mixtape first, though to get the streets more familiar with my sound. I wanna introduce my sound to the industry. I got material lined up so when the label steps in I can go back and re-record. I got thirty songs, but put out fifteen bangers for the mixtape.

Parlé: Is “Stop Playin’” from the mixtape, your next single?
Big Bank Black: It should be. Right now in Atlanta we’re working a few others. We’re trying to break in a lot of songs, I want the people to decide. We got four songs going at the same time, so we’ll see.

Parlé: You’ve said in a past interview that “Stop Playin’” is your favorite. Why and how does that differ from the others you have out now?
Big Bank Black: It’s my vibe, you know. The whole vibe, it’s got an old school feel to it. I’m a R & B guy. I’ll ride around listening to R & B before I listen to rap any day. It puts you in a good mood.

Parlé: Where would you say you get your motivation from?
Big Bank Black: Day to day. Everything that just goes on. People say that every day. Day to day shit. I might get up and see something. I use whatever’s around me. 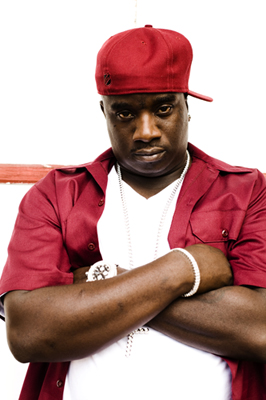 Parlé: How do you distinguish Duct Tape Entertainment and your style from others in the game right now?
Big Bank Black: I put out everything. Most rappers TRY to be street niggas or whatever, but I’m a street nigga. I’m trying to dumb it down. I ain’t trying to come with the same ole typical story. I try to switch it up and do entertainment, where it’s not so much about my life. At the end of the day, niggas have told my story already. I might as well just entertain. I’ve really lived this. I want people to build their own perception of me. I don’t want people to think I sound the same. A lot of these rappers be around people like me but ain’t really lived the stuff I’ve lived.

Parlé: You were raised by your grandmother…..
Big Bank Black: Yeah, my grandmother kept the block in line. She raised the whole neighborhood. Everybody. She an OG for real. I couldn’t have had a better teacher. You know a lot of people got grandmothers that bake cookies. Naw, my grandmother kept us in line. Let’s say this, if she came home from work and a glass was broke and you ran in there and told her, she’d be like don’t tell me – I’ll figure it out, don’t tell nobody. I raised my kids the same way. Don’t tell on nobody else.

Parlé: What other projects are you working on?
Big Bank Black: Just keeping the mixtape going. The video is out on the web. I just wanna see the response. I just want to do a hit a record. At the end of the day, a hit record is a hit record. I just wanna put some shit out and see what it do. I say to a lot of these upcoming rappers, put out a record and see the response. If people don’t like it, put something else out. So many people have turned this into a hustle, and you can’t knock that. I’m trying to help out a few which is why I signed them to Duct Tape. Getting my name out there, that’s the motivation.

Parlé: How can people get in touch with you?
Big Bank Black: Hit up the MySpace at Bigbankblackdte

The Incomparable, Yelawolf, “Who’s Next?” feature