Skip to content
Home » Wiz Khalifa – His Turn To Shine 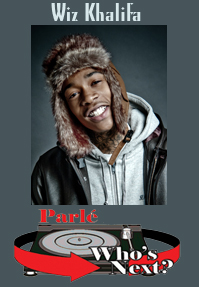 He’s fresh. He’s rapidly rising in the ranks. He’s a force to be reckoned with. He comes from Pittsburgh and he’s a Hip-Hop and Techno blender. He’s Wiz Khalifa and if you hadn’t heard of him yet, you have now.

The 22-year old artist has performed with big names like T.I., Nas, and Lil’ Wayne, but ask Wiz and he’ll tell you – it’s his time to shine. We sat down with Wiz and got his thoughts on where he’s been so far and what’s still to come.

Parlé: Tell me about your childhood and coming up in a military family. How has this shaped who you are today?
Wiz Khalifa: Well really it’s just about moving around a lot. When I was thirteen or fourteen I moved back to Pittsburgh for good. But, being in a military family, I got to see a lot of different things that kids my age weren’t able to see. I got to live overseas and stuff like that. It just helped me to be able to be comfortable just being myself and knowing who I am and what I wanted to do without letting too many people influence that. It really didn’t have much of an impact on my music because I’m from Pittsburgh and that’s where I grew up. That’s really where my music comes from but moving around, being in the military, really helped my personality and all that.

Parlé: Who were your musical influences growing up, and who do you look up to now?
Wiz: I definitely looked up to Biggie, Bone Thugs ‘N Harmony, Wu Tang, and I was a big Cam’ron fan. I still am a big Cam’ron fan. I listen to all types of music. The Police, Rod Stewart, just all sorts of early 80’s music, R & B and soul stuff, all types of music, man. Even then and now, I listen to all kinds of music and just incorporate it into what I do.

Parlé: Tell me about the name Wiz Khalifa. How long has this been your stage name and can you explain where it comes from and what it means for the people out there that don’t know?
Wiz: It’s crazy ‘cause I’ve been rapping since I was about eight. Other than, y’know, the regular eight-year old rap names, it was when I was about ten or eleven that I really became Wiz Khalifa. Everybody just called me Wiz anyway because I was a young Wiz and anything I did, I was pretty much good at it. Khalifa means “successor,” or like a shining light or example. It’s Arabic and my granddad actually gave me that name because he saw what I was doing with my music and everything, so I just put the two together and that’s pretty much been my name forever.

Parlé: How has living all around the globe affected your approach to music as far as who you’re targeting. Has your worldly upbringing made it easier to create fan bases in countries outside the U.S.?
Wiz: Mostly it just made my personality more broad. A lot of people don’t get to experience different types and different classes of people. There’s rich people, there’s people with less than I had, there’s people with the same amount that I had. So I got to be around all different types of people and really just see it for what it is. Some people who aren’t as fortunate, a lot of the people I know growing up in Pittsburgh, a lot of my family members and stuff, all they know is Pittsburgh and its neighborhoods. So, I think I am able to have a more worldly sound just because I’ve been around the world.

Parlé: You’ve performed with tons of big names in the game like T.I., Nas, Lil Wayne, and Young Jeezy. At 22, you’re on stage with the best of the best, what is that like being so young? Has this made you mature as an artist and step your game up at a faster rate than other up and coming stars like you?
Wiz: Well, I’m more concerned with myself and making my own fan-base. I did open for a lot of the artists, but more than 75% of my shows are me headlining my own show and doing my own thing. So, that’s really what I take more pride in and what I’m really shocked at is that I have a constant fan-base that I can go out and perform for, just by myself, and sell out a crowd or do an in-store and there’s thousands of people outside waiting.

Parlé: You recently went back to Pittsburgh, what’s it like to go home after being on the road, performing for the people that helped you break on to the scene?
Wiz: It’s always good, just being that I’m from Pittsburgh and that I live in Pittsburgh. I have to limit the shows I do here just so it can be an event every time I have one. When I am home, I’m just chillin’ out at the house or in the studio, so it’s always nice. It’s nice to get to do a show where people come out and it usually does really well like a sellout crowd and there’s no violence and everything’s cool so it’s always nice to come home after being on the road.