A Look At Hip-Hops Worst Tattoos

It seems like everyone has a tattoo these days. And while getting inked can be a great form of creativity and expression, some people just take it too far. Here are some Hip-Hop artists who should invest in laser removal in the very near future.  Hip-Hops worst tattoos. 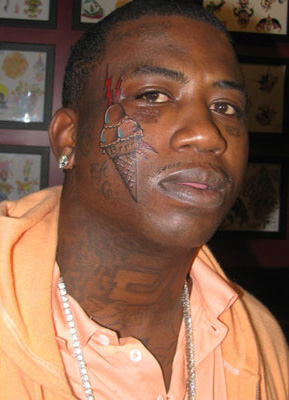 Unless a lifetime sponsorship with Baskin-Robbins is in the works, rapper Gucci Mane’s new ice cream cone tattoo was a terrible idea. A play off Gucci’s famous “Brrr” catchphrase, the tattoo is poorly designed with red lightning bolts inexplicably coming from the top of the cone.  Gucci may have bigger problems coming up but a permanent image of a frozen treat on his face surely will not help his situation.

Birdman Red Stars tattoos
Brian “Birdman” Williams has a net worth of over 50 million dollars and is a founder of one of the biggest Hip-Hop labels in history with Cash Money Records.  These are reasons why he may think he can get away with tattooing literally anything on his body and have it be seen as cool.  The “Number one Stunna” went overboard in late 2009 when he decided to get several red stars tattooed onto his head (why he would decide to draw any more attention to his particularly odd shaped head is anyone’s guess). In Birdman’s defense, one of the stars cover up an oil rig tattoo (above) that he concealed after his oil business company was found to be fraudulent. He wouldn’t want to look stupid after all.

Soulja Boy’s lion tattoo
Atlanta’s Soulja Boy has an impressive amount of ink for someone his age, but the poor quality of the ink make them look like he got them in a back alley. The lion tat on his chest is a special kind of awful. With little detail and poor design, the lion looks more like Mufasa from The Lion King than a threatening king of the jungle.

All of Riff Raff’s tattoos
Riff Raff should not be considered anywhere remotely related to Hip-Hop, but his tattoos are just too ridiculous to be left out on this list. Riff gets his ink inspiration from corporate logos with tattoos of BET, MTV, and World Star Hip Hop.com logos on his neck and chest. Mostly known for embarrassing his family and hometown on the second season of MTV’s From G’s to Gents, Riff Raff has tried to forge himself a rap career in the past couple of years. His bad tattoos may be a distraction from his bad lyricism, but his artwork is too silly to be taken seriously.