Skip to content
Home » The Cool Kids: Bringing A New Flavor To Hip-Hop 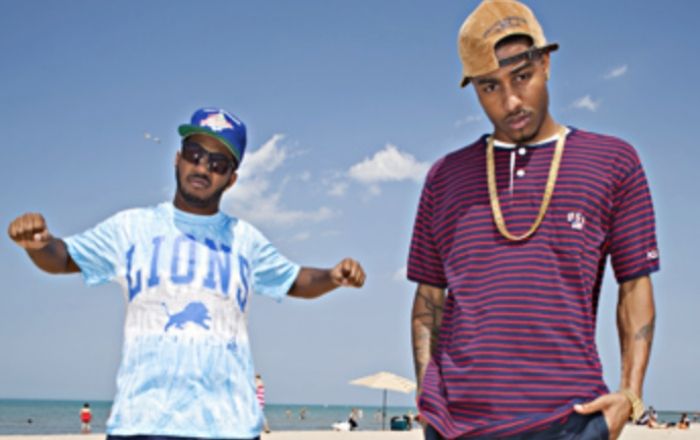 Representing the Midwest newcomers, Sir Michael Rocks and Chuck Inglish, are laying down the law with their melodic beats, powerful lyrics and a passion to do what they love and be the best at it.   Known as The Cool Kids this dynamic duo holds more than five years of preparation under their belt and now are ready to release their debut album When Fish Ride Bicycles. Having worked with some of the biggest names in the music industry and holding down a stage presence all over the world, they have a sound all their own. Its clear by our chat below that they came to take over. Check it out.

Parlé Magazine: Thanks to for sitting with me, I’m eager to learn, how did such a unique group form?

Cool Kids: Well, actually we both started producing and a mutual friend of ours introduced us and we started making music together.

Parlé:  So if you were both producers how did you end up forming a Rap duo?

Sir Michael Rocks: I was just producing but I had always rapped but left it alone for a lil bit and got more into producing. Then one day when he was playing some beats and I had some old raps that kind of went to them and he told me, like yo, you should keep rapping and I’ll make more beats and a few songs turned into dozens.  And he was rapping as well to accompany me on the songs and I was like, yo you should keep rapping too and that’s pretty much how the group was formed.

Parlé Magazine: It seems like it all just fell into place and you fueled each other’s inspiration for the music, but do you have any other influences for your music?

Chuck Inglish: We’ve always said that our lives growing up have inspired us. Things like a car coming down the street and you stopped like DAMN what are they listening to? And on top of that the car was cold. This was back in 92, 93, 94 when sh*t was more live and I was just obsessed with that era.  The older dudes that I knew who were on top of their sh*t would listen to tapes you had to have and I knew that I always wanted to be that tape. I wanted to be the mysterious “DAMN what’s that, I got to get that.” There wasn’t a real musical influence just the experiences.

Parlé Magazine: Most artist have experience’s that influence them to create great pieces of work, were there any personal situation’s in your lives that you convey through your music?

Chuck Inglish: Yeah, it was pretty much everything in general. We don’t have your typical Rap sob story (laughs). We never really had to go without and we knew our parents, and all of our families were tight so we come from a different world where people like us don’t end up Rapping but go to college and hoop or something. So when he and I met we saw that our worlds were very similar and we wanted to really incorporate the stuff we thought was cool growing up in the music. Things like going to the barbershop with your dad, or going to an older friends house that had a hot rod with a dope engine in it. It was feelings like that that made me want to be like that dude and now that I’m that dude I want to give others that same feeling.

Parlé Magazine: With life as a fuel for your music I know you’ve created many singles and mix-tapes over the years as well as prepped to release your debut album back in 2008. Why the wait?

Chuck Inglish: Yeah, we were in an unfortunate situation, that’s a common story between most bands and labels and at a point in time when we made enough money we saw what it was looking like.  Our moms, who are hella involved in our career, told us to save some loot because we may end up suing them before things got out of hand. We saw that we were getting screwed and sued and things still got out of hand (Laughs) but at that time I felt it was smarter for us to just keeping working and dropping music and keep working on the album. Now that its come closer to an end its better now to tell our story because you’ll hear all the hard work through the music.

Parlé Magazine: And through all that turmoil and label drama how does it feel to finally be done and able to release the Cool Kids debut album?

Chuck Inglish: GREAT. LOL. Its so funny because everyone asks that and I don’t know how excited to be. LOL its almost like a child getting a toy or getting out of jail, I feel like we just got out of jail and our lives are starting. I’m proud that we stuck through this and made it and nobody can take that from us. This is that record that says we’re really here now and if y’all weren’t scared before, be scared now!

Parlé Magazine: LOL. All the hard work seems to be paying off then, but I’m sure it doesn’t stop there. Are there any other projects your fans can expect from you in the near future?

Chuck Inglish: They can expect another record that’s going to make the one we’re putting out now look like bullsh*t! (Laughs)

Parlé Magazine: Cool, I can’t wait to get ahold of my copy then! Is there anywhere else you’d like your fans to check you out?

Sir Michael Rocks: @sirmichealrocks is mine.

Chuck Inglish: I’m also working on a site also coming soon and were about to kick it into high gear so you’ll see much more.

Parlé Magazine: Great to hear! Thanks for speaking with me today fella’s.

Shontelle – A Look At The Authentic Bajan Singer

Jason Derülo: Back For More

DJ Whoo Kid – Ask About Him