Sometimes, it must fall upon the journalist to ensure that what they are hearing in an interview is clear enough that they can truthfully and accurately present their subject’s words as quotations. This may require asking for an answer repeatedly, admitting you missed something that could have been important, or actively picking and choosing which quotes should be completely captured in a form of verbal triage. Other times, it may simply require asking the subject to slow down because your cell phone’s speaker is woefully inadequate. Such was the case with Kirko Bangz, and regrettably, I did not follow the advice laid out above. The following is what I can transcribe from my conversation with the Houston hopeful, whose Drake on promethazine approach has been reverberating within the scene.

Parlé: What’s up man? What are you guys up to right now?
Kirko Bangz: I’m just chillin’ man, jamming some music, just chillin’.

Parlé: I have a question for you. I don’t know if your a football fan, but I know with the Texans and the Cougars having big years, it was a big year for Houston. Are you a fan of the game, being in Texas and all?
Kirko Bangz: Yeah, most definitely man. I get out there sometimes with my homies … actually, I got a homeboy that I went to high school [with], he started on the offensive line for the Texans, and I got a little homie that went to high school with me starting on D for the Cougars. So yeah, most definitely showing love for the city man.

Parlé:  I was doing the research, and I read how the Procrastination series of mixtapes started in school. You went to Prairie View, right? How did your time there effect you as a person and an artist?
Kirko Bangz: You know, I’m from Houston, and Prairie View is predominantly Houston and Dallas. And even though Houston and Dallas are close to each other, they are real different … if you could make it in Prairie View, you could make it anywhere. There’s … a lot of competing, stuff like that … they’ll boo you at talent shows … it’s real hard to make it out of Prairie View, understand?

Parlé:  It seems like there were a lot of Houston guys sort of in the mid, early 2000’s, with Paul Wall and Slim Thug and those guys. Recently, guys like yourself, Killa Kyleon, Fat Tony have been coming around. Do you think that there’s a second wave of Houston rappers coming?
Kirko Bangz: Yeah, most definitely man. Everything always comes back around. That goes for anywhere … people trying to make it. Contribute to the scene, put the city back on the map.

Parlé: It seems like a lot of people make comparisons, and one that gets tossed around a lot is Drake. Do you think there’s some merit to that, or is it just guys like me being lazy, and just pigeonholing you with someone already out there?
Kirko Bangz: It is what it is, you know what I’m saying? I’m fresh in the game. I mess with the dude. I mess with Drake music, and Drake mess with my music. It’s cool, I’m just making my own lane. It’s gonna take a while for people to learn that. He first started, it’s tough for people to say ‘that dude’s tight’ … of course they’re gonna compare it … as long as I can keep on putting out music and keep on progressing after that …

Parlé: I was listening to the mixtapes, especially Progression 2, and it seems to me you sort of write about things that are maybe a little deeper than the average mixtape that people are putting out. Is that conscious, or is that just how you are when you’re writing lyrics?
Kirko Bangz:  It’s just me, man … it’s way more than what people get when they first here my songs on the radio. All of my music is stuff that I actually go through in my life, or stuff that I see people around me going through.

Parlé: … “Drank In My Cup.” Can you tell me a little bit about that? That was … a real interesting beat … What kind of process did you go through for that song?
Kirko Bangz:  My homeboys … I came to the studio and they had the beat. I heard it, and I started to go with the melody and I just came up with the hook … on the track there was like some water, like pouring out into a cup kind off. I was like ‘put that back in there, put that back in there’ and that’s how I came up with the ‘drank in my cup’ part.

Parlé: The first time I listened to it, I was pretty excited when everything got slowed down a little bit, sort of DJ Screw style. People stopped doing that, I feel like, especially out here on the East Coast, where everyone was jumping on it. Did that go away in Houston? Are you bringing that back? Has that always still been the sound out there, or what?
Kirko Bangz: It’s always been out here … I feel like people are going to stray away from it because it ain’t making the money for nobody out here … you gotta be proud of where you come from. Even if your not getting the love or the support … always stay true, because when that wave comes back around, you don’t want to be caught out there doing what other people are doing, when what people want is obviously what Houston’s doing right now … stay true. 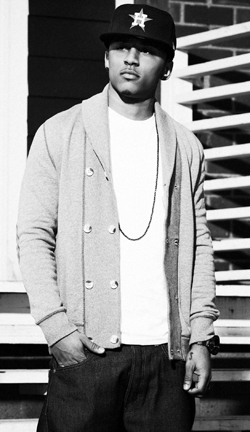 Parlé:  Tell me a little bit about Progression 2. I know you hit 25,000 already over there on Datpiff. Did you expect to move that much, did you expect to move more? How do you feel about that tape.
Kirko Bangz: Really, I don’t pay attention, I never pay attention, to no numbers, no views, comments … I just try to keep on going, keep on living my life so I can continue to put out music that’s real. As far as the mixtape we got tracks like “Drank In My Cup” … then I got stuff that I rap on … we just try to mix a lot of thing that I do.

Parlé: Oh yea, I remember Big Moe [laughs].
Kirko Bangz: He was crazy with those melodies …

Parlé: Alright. What’s next, man? What’s next for you?
Kirko Bangz: I’m still writing … just working all around.

Parlé:  Any last words, or anything you want to add?
Kirko Bangz:  Follow me on Twitter man: @kirkobangz.