Every year around this time music lovers start to anticipate what will be the ill-est sound, dopest verse, and sexiest performer for the rest of the year.  So I’d like to officially announce my vote for the category of hottest new rapper to hit the scene. I know, it may seem a bit premature given that new artist pop up every day but New York born lyricist, Yung Nate has been steadily working behind the mic releasing several smash singles and penning future classics for other artists alike. With a down to earth and relatable swag as the forefront of his talented persona, underneath lies a strong ambition to express his love for music, being exactly who he is and sharing that with his fans.   Check out the dialogue below for more on his latest album Meant to Be Broken and his plans for changing the art of rapping as we know it

Parlé Magazine: So you’re pretty young in the game, but I understand you have loads of experience, when did you first get into music? Start making your own?

Yung Nate: Pretty much as long as I can remember, but I started taking it seriously when I was around 15 or 16 years old. That’s when I started getting into certain label situations and people started paying attention to me. That’s when I realized I could really do it.

Parlé Magazine: Most artists who start out that young had a situation of some sort that sparked or ignited their passion for creating music, what started yours?

Yung Nate: Umm, I pretty much needed an outlet for everything that was happening in my life at the time. Like, I didn’t come up having the best background and wasn’t as fortunate as many other people and had a lot of aggression in me. I was looking for different ways to express myself and writing was something that I always enjoyed doing  and it just came out in that form.

Parlé Magazine: I hear your parents also shared your same passion for music as well. Did they contribute to your desire to be an entertainer?

Yung Nate: Oh yeah, definitely. Like I said I was making music for as long as I can remember, my father was a rapper and though he wasn’t there for most of my life I remember that he used to take me to the studio with him to record. He’s a DJ now, but that experience was a heavy influence on my life. My mother also worked for a record label and being around that aspect of music seeing how things go in a official way, I saw that I could really do this professionally if I wanted to.

Parlé Magazine:  And when you sought out to create music professionally you weren’t necessarily trying to be a rapper and ended up in a group with fellow musician Charles Hamilton. How did that come about?

Yung Nate: Umm, We pretty much had two different ideas of where we wanted to go career wise. I was taking music seriously but doing it as a hobby and at that time if I had my choice I would have taken a back road in the industry and did something like management. It was the label, Jive records that heard our music and came up with the idea that if they were going to shop us and work with us we should become a group. Basically we were two solo artists that they thought would do better together, so it was never a really permanent thing.

Yung Nate:  From there we started to have different outlooks on where we wanted to go and I just took my music and my business very seriously. So I started on my own and worked hard.

Parlé Magazine: I see that passion has led you to now releasing your album Meant to be Broken, which you’ve said has been very personal for you. How is this different from the work you’ve done before with Charles?

Yung Nate: This album is the first time I turn the tables to pretty much speak on myself. I’m always brutally honest with my music, but I touched on a bunch of issues and problems in my life that I never addressed ever before on a record. A lot of the things in my life that I felt were affecting me such as my family and not seeing them in over a year and relationships with females stagnated the way I made music and now on this record I pretty much focused on all those things.

Parlé Magazine: On one of the more sentimental tracks, Talk to Me, you state that this album saved your life. Can you elaborate on what you meant?

Yung Nate: Umm I was giving up on music. I had actually given up on music back in April a little bit after I put out my first project the I Heart YN project with DJ Enuff and DJ Quiz. I  was pretty much tired of fighting, mind you I told you I had been doing this since I was 16, I’m 22 now  so that six years of my life that I devoted to music and struggled and gone hungry and finally reached that point where I said “what the f***,” (laughs) you know. I wasn’t satisfied where I wanted to be and was just tired and spiraled out of control, but it was my manger and people in my corner that told me “Yo Nate, you’ll never get quite over what you’re going through if you don’t talk about what’s going on right now.” So over this project I spoke about everything including wanting to give up cause music was my outlet. Music was the only thing I truly feel like I’ve done positive with my life. So this project allowed me to get the confidence back to see that I could do great things again.

Parlé Magazine: Going through so much and finally being able express yourself what would you say to your fans or peers going through the same thing?

Parlé Magazine: Whiles listening to your album I noticed in songs such as “Feelings” and “Two fingers to the Sky” that there was not only a sense of raw emotion but that your style of music was different from anything I’ve heard. A blend of Hip-Hop, Pop, and ol’ skool rapping. How would you classify that style?

Yung Nate: Umm, innovative. My style is innovative because I don’t put myself in a box to be called one thing but I know who I am as Nate. So, no matter what beat or anything that I decide to do or put my mind to, I know how to implement that raw and ruggedness in things. On every single record I know how bring my own Lil edge to it and craft it into something for me.  You never quite know what you’ll get out of me until you put that record on.

Parlé Magazine: Great way of putting it, are there any outside influences that you take into consideration when crafting your music in general?

Yung Nate: Pretty much all the rappers and everyone. From Lil’ Wayne to the guy that’s on your block with that demo tape. I’m the type of person that will listen to that demo tape to see where people are at and what they like. I listen to R & B and Soul, Jazz, Pop, and Rock. I was just listening to Florence and the Machines all morning you know, I’ll pretty much listen to anything (laughs). I’ll listen to some dudes beating on some drum buckets and take it in and say “how can I do that, how can I flip that over to my music”. 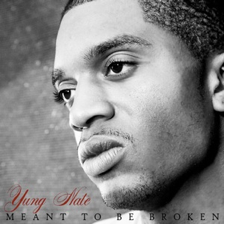 Parlé Magazine: They say the test of a true artist is to check they’re iPod and if they have more music from everybody else than theirs then they’re legit (laughs).

Parlé Magazine: And now that we’re on the music of other’s I understand your venturing out into other things such as penning songs for new Artists? What else are you up to and where are you headed with that?

Yung Nate: I’m headed towards being huge and innovative.  I plan on showing what I can do as far as Hip-Hop and pushing the boundaries of that because Hip-Hop is just free expression and as far as song writing I want my name to be every where. I see myself being as large enough to do concerts on the moon, that’s where I see myself. And sticking to my business, and being completely focused because I just want to change the sound of music and lead my generation. You know, my generation is lost right now and we need that leader that’s not going to talk about bulls**t so to speak (laughs). I want everyone to have a good time but I also want us to be socially conscience of what’s going on. A lot my records do have that message in there I just tuck it away but if you memorize the words you’ll see the meaning.

Parlé Magazine: It’s rare you find someone who creates music with that kind of passion for change and purpose. Do you convey that any where else in your life?

Yung Nate:I was youth motivational speaker before coming to L.A. but that’s something I plan on getting back into. And pretty much just giving back.

Parlé Magazine: That’s good to hear. I have to such it was pleasure speaking with you and seeing who Yung Nate is behind the music. I’m looking forward to hearing more from you man.

Yung Nate: Thank you, Thanks you for having me!

Round By Round Break Down of the Mannie Fresh vs. Scott Storch Battle