Skip to content
Home » Won’t Back Down movie review 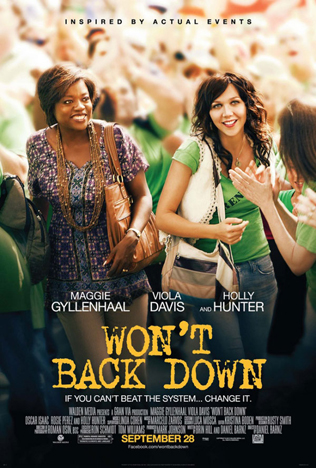 You never know what to expect when a movie starts with ‘Based on Actual Events,’ and it’s first shots take you through a school’s hall ways. With Viola Davis and Maggie Gyllenhaal as the movie’s leads I was thinking it could go one of two directions, Dangerous Minds or Freedom Writers. Thankfully it was neither.

Won’t Back Down is book ended by a little girl in class attempting to read. We don’t know in the beginning that this little girl, played by Emily Alyn Lind, is dyslexic, but we know there has to be a problem with the teacher in the room texting and not doing more to help this girl get through the sentence. We find out soon that the girl, named Malia is the daughter of Maggie Gyllenhaal’s character, Jamie Fitzpatrick. Jamie is a single mom, working two jobs to make ends meet, but she’ll do anything to make sure her daughter is well educated and provided for. Sounds like the story of far too many mothers in this country, but this mom has a fight about her that’s not too common for parents of young school aged children. When she is told to wait, she continues to pursue, fighting through the red tape and bureaucracy that is the school system, in this case the Allegheny School system in Pittsburgh. The fight takes a turn promising turn only after she meets Nona Alberts, played by Viola Davis.

Nona’s story probably could’ve used more introducing because there wasn’t a real explanation for some of the things that provide her with the passion to embark in this journey. The mother of a young son herself, and a third grade school teacher at Malia’s school she is losing the love she once had for teaching, but she continues to be one of the more dedicated teachers. What we do know is that her own son seems to be dealing with issues at school and her marriage is falling apart. Perfect time to tackle the education system, right?

Jamie is the driving force in this film. A college drop-out, with no experience in the education system and having a naiveté about the inner happenings actually helps her cause. So when she finds out that she can take over the public school where her daughter attends, she springs into action. She convinces Nona, while another teacher becomes her love interest as she fights for the cause and the seemingly impossible task is under way.

The acting is incredible, from the children to the various teachers, as well as the antagonists in the film who play the roles of the Teacher’s Association in the movie. Newcomers and veteran actors alike all play phenomenal roles in the movie. Holly Hunter, Rosie Perez, Lance Reddick, Oscar Isaac and Dante Brown (playing Nona’s son, Cody) round out the cast. Ving Rhames make s a special appearance in the film as well.

The most important goals of the movie are to remind viewers that first, people, not the politicians or the bureaucracy have the majority and the power—when it comes to education or just about anything else. So anything the majority comes together to achieve can find success. And the second goal, one can’t forget the age-old message that children are the future. If we can get our youth properly educated and on the right path than we can get our country on the right path.

Won’t Back Down receives a PAR