Producer, Rapper, Hip-Hop pioneer, food connoisseur, entrepreneur, no matter what title you know him by there’s very few people who don’t know this half of Hip-Hop’s legendary dynamic duo, Three-6-Mafia, Paul Beauregard, better known as DJ Paul. Holding down a career spanning two decades and having dabbled in everything from real estate to his very own BBQ sauce, DJ Paul shares just how life is getting better on a whole new level,  and talks about the release of his latest project, movie and album, Person of Interest.

Parlé Magazine: A career in the music business as successful as yours doesn’t come from out of thin air, instead it comes from an intense love of what you do, when did that love start for you?
DJ Paul: Man, I been in love with music since I was a kid. I grew up in a house around music and my uncles had a Gospel group so I was just always around it.

Parlé: When did that love turn transform you into DJ Paul? How did you know you wanted to make a career out of it?
DJ Paul: When I started getting paid off of it! (Laughs) You know its one thing for everybody to love music but to get paid off of it is totally different. (Laughs)

Parlé: (Laughs) Was that when you started your DJ career?
DJ Paul: Man believe it or not man I started getting paid from the beginning. I was lucky I didn’t have to really to struggle like everybody else. See what I did different from what a lot of artists do these days and I still do it to this today is I won’t put out no music unless I really really love it. Unless I can get goose bumps, and you ain’t gon’ get that off every song you make, but I try to do that for the singles for the most part. I don’t just put out music just because. Man I run into people and I ask them “how long you been singing, or how long you been rapping?” And they be like. “man this is my first song, I just started.” (Laughs) I’m like, “Ok, you’re gonna try and shop the very first song you make? That’s stupid!”

Parlé: Speaking of new artists, you just released a song featuring Busta Rhyme’s going hard on new age music. What’s your stance on new school Rap? Are you feeling it?
DJ Paul: I don’t to be honest with ya, it just it aint me you know what I’m saying. It’s too simple. I come from  the days of Public Enemy, you listen to a song like “Welcome to the Terror Dome” and see how the beat changes or an even better one “100 Miles and Running,” by NWA, where the beat changes up here and there and it keeps the song interesting and keeps you glued to the speakers. MC Ren comes in a certain way, then Dre (Dr. Dre) comes in another way, then it might be a bridge some scratches then another lil’ change up and it’s just more interesting. Some of the music these days have one sound through the whole beat. It’s just a (imitates a metronome) through the whole song and you be sitting there like, OK?

Parlé: I can agree with that, I like my music with a lil texture to it as well. Though some new artists have been able to put out a couple quality hits now a days, are there any that you think might be up to par?
DJ Paul: Yeah, uh I like Waka Flocka man cause you know he brought back that kind of energy, that Three-6-Mafia energy. The crunk and party type. I’ll have to really think cause I don’t listen to a lot of new school music so I don’t know all the cats names but I like Drake and people like that.

Parlé: Good choices and given that you don’t listen to a lot of new school music what kind of music would I find in your iPod? What are you bumping?
DJ Paul: Man 80’s music, classic rock, 70’s R&B and Soul and more 80’s Pop.

Parlé: All across the board, from Gospel to 80’s Pop, it seems you have a broad understanding of music other than your own genre of Southern Rap. Would you say all these different things influenced your music and your new album Person of Interest?
DJ Paul: Yeah man I come for a household where growing up in the 80’s people still listened to the 70’s and I would be with one of my brothers and he was a pimp, in the old skool Cadillac and he’d listen to something straight smooth pimpin’ like some Womack. Then I’d go be with my other brother who was a drug dealer who’d listen to some more hard core pimpin’ like David Ruffin or Eric B and Rakim or the Geto Boys. And on top of that me just being young and listening to the radio I’d be listening to Jazzy Jeff and the Fresh Prince so all of that influenced my music and the sounds that I wanted to produce.

Parlé: Having mastered/pioneered what crunk and southern rap is today what can fans expect Person of Interest to sound like?
DJ Paul:  I tried to make it a new version of the older stuff, a little bit of Mystic Stylez and a little bit of Chapter: 2 World Domination put together. It’s basically hard core shit with probably like one crossover/semi-crossover record on there, but the rest of its straight hard core street shit talking about the usual shit (Laughs).

Parlé: Any new collaborations or features on it we should look out for?
DJ Paul: Yeah, you got DJ Kay Slay, Gucci, Project Pat. There’s a couple.

Parlé: Along with this new album you’re also putting out a mini-movie of the same title. I hear stalking is involved (laughs) can you tell me more about it?
DJ Paul: I kind of based it off true issues or things that I’ve heard or seen other people go through. I’ve had guy stalkers you know people who want to be rappers but in this movie it’s a girl that I meet and instead of giving her my telephone number I give her my twitter. We start following each other and after she starts DM’ing (Direct Messaging) the hell out of me we ended up going on a date and it goes on from the until she turns crazy and starts following me in real life.

Parlé: And based off the trailer it seems to be a good watch. Were you also the writer and producer?
DJ Paul: Yeah to be honest man I produced it and I guess you can say I wrote it, I didn’t really write nothing down I just thought about it and we did it. We just wanted to put some exclusive videos on a DVD and ended up putting them all together and making them go together as a movie.

Parlé: Are you planning to continue to produce/direct longer films in the future as well?
DJ Paul: Yeah man, definitely cause I like doing that. It’s fun and you know everybody loves a good movie. A lot of movies that come out these days don’t be good, (Laughs) but yeah I want to do another full length movie but this one is cool and it’s free with the DVD when you buy it in stores. 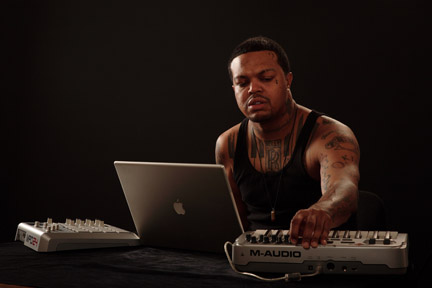 Parlé: Cool, now having produced, DJ’d, scored an Oscar winning song and still doing what you love how are you feeling about your life now-a-days?

DJ Paul: Aww man, I love it man you know. It’s good now because it ain’t as crazy. I’m more of a the family man now which is gravy cause I had partied so much in my life and as much as you try and get away from it you still do it again, but now I know how to cut it off. I just had to ground myself. I have a responsibility and a have to go home at night. Back in the day I didn’t have a reason to get up the next morning. I’d just be in the studio all night and go to a club or a bar or whatever but now I can’t do that. I got my real estate company besides rapping and my BBQ line and shit I have to look over and I like it cause I can still make my music and do other stuff.

Parlé: With so many things accomplished and so much more on the way why do you keep hustling, after all these years? You can easily retire and just relax.
DJ Paul: Because I’m like my biggest fan you know so I do it for me and I also do it for my fans who have been down with us forever. I try to just be there for them and keep it up as long as I got the strength in my body because there are a lot of musicians I grew up with that I wish were still around so I could listen to their music. So as long as I’m still around I’m gonna do it for them.

Parlé: And as a fan that grew up listening to you I gotta thank you for this interview. Is there anything else your fans need to know about you and what’s to come?
DJ Paul: Yeah man just pick up the album Person of Interest out now and follow me on twitter @DJPaulKOM, facebook DJ KOM Offical, and pick up some of my bar-b-que products at www.djpaulbbq.com and stay up on the music at www.djpaulthree6mafia.com

Parlé: Cool, Thanks again man I wish you the best with everything you’re planning.
DJ Paul: Appreciate it. Be Safe.