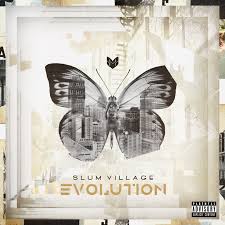 Slum Village’s Evolution is the seventh release from the Detroit based Hip-Hop group. The group has been around since the 1990s and has undergone several group changes, with the most recent being the departure of Elzhi in July of 2010. The album opens with “Braveheart,” which features Havoc from Mobb Deep. The beat is engaging and feels as if it could’ve been featured on a Mobb Deep album with the profound impression it leaves. “Let It Go,” is a hypnotic musing with an irrefutably memorable vibe. The smoothness of the cut complements the group’s rhymes as they, along with rapper, Blu, forge an undeniably superb underground Hip-Hop reinvigoration of Slum Village’s complex sound.

The first single off of Evolution, “Forever,” hearkens to what Slum Village knows best – driving drum patterns, lo-fi sonics and subdued backdrop that J Dilla utilized before leaving the group in 2002. “Summer Breeze,” continues in that same vein. The melody embodies the true meaning of evolution, which is defined as a continuous change to a better state as well as finds a way to incorporate double entendres. “Hustle,” provides murky production for members Illa J, T3 and Young RJ as they spit verbal manifestos on the track, while “Riot,” ends the evolution and is quite possibly one of the collector’s items from the album.

Evolution has been long-awaited by underground Hip-Hoppers and Rap enthusiasts’ alike coming on the heels of the Dirty Slums mixtape repertoire. While Evolution is something new from Slum Village, there are tinges and reflections of members from yesteryear. It is a testament to the fact that while the group has seen many ups and downs, they are not going anywhere.