Skip to content
Home » ‘The Trip To Bountiful’ Play Review

The Trip To Bountiful play is without a doubt, an amazing career celebration for Cicely Tyson. The acting legend gives us her all on stage for the Broadway play, singing, dancing, providing humor and bringing the audience to the edge of tears as Carrie “Mama” Watts, her first theater role since 1983. It’s not fair to say that she steals the show considering that she is the lead, but, Tyson almost makes you feel that no matter who’s to play the characters alongside her, she could make you forget their Hollywood and Broadway resumes.

The Trip To Bountiful is a play by playwright, Horton Foote, one of the great names in American theater. On this particular night, the crowd was lucky to partake in a talkback after the show that provided some precious background information on the play, as well as information on the life and legacy of Horton Foote. On the panel were Bountiful’s director, Michael Wilson, Foote’s daughter and manager of his estate, Hallie Foote, Tony Award winner and 2012 inductee into the Theater Hall of Fame, Betty Buckley, and Ellen Burstyn, one of the few American actors to win the triple crown of acting, as well as a former actress to take on the role of Carrie Watts. The members of the talkback are currently in rehearsals for the next Horton play, The Old Friends. 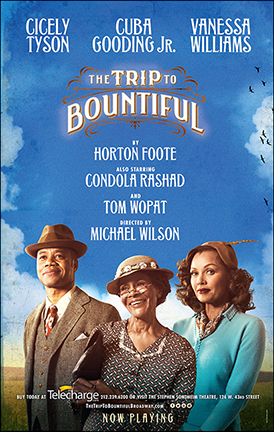 The Trip To Bountiful premiered in this same theater back in 1963, although it went by a different name at the time—Henry Miller’s Theater. The play has gone through a few minor transformations as it has made its rounds, including a film version of the play, but the latest tweak is the change of race for the main characters, which the production team decided to do with this current run. A well received change, this run of Bountiful has become the longest run of a Horton play on Broadway thus far, at 5 months, and expected to go on until at least the 9th of October.

“We knew we needed good actors, and we got those, thank God.” Hallie Foote said of the current run. She continued with her thoughts on her father’s work. “What struck me about my dad’s work is how easily it translated to the African-American experience. He tapped into the human experience, he wasn’t sentimental and he sort of had a clear eyed vision of it, but that to me is his greatest strength.”

The Trip To Bountiful follows Mama Watts on an escape mission from her home in Houston, TX, where she lives with her son, Ludi, played by Cuba Gooding Jr. and his wife, to her first home in the town of Bountiful. The town, a fictitious spot in Texas, is nearly abandoned having lost value to most of its residents because it won’t grow crops. For that reason and because her son and his wife don’t want to leave the life they are leading in Houston, they have refused to bring Mama Watts to her hometown. But on this day, after 20 years since her last stay in the town, she is determined to get back there, determined to find the joy of her younger years.

Standing between Mama Watts and her happiness are several obstacles including her daughter in-law, played by Vanessa Williams. Williams was on stage towards the end of the talk back to provide some perspective for her character as, “very much in love with her husband, but constantly in battle [with his mother] for his attention. It’s two women vying for this man’s attention.” The battle plays out often on stage throughout the play.
Adepero Oduye rounds out the main cast, an amazing talent in her own right, having lit up theaters with her performance in the film Pariah a couple of years back. Oduye plays DeMornay, a friend Mama Watts meets along the journey. 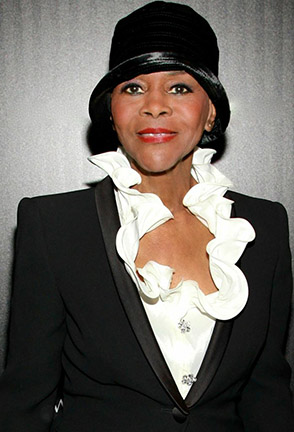 I can talk it up about the supporting cast, but Bountiful comes down to the amazing performance of Tyson. Sure she’s made appearances in recent films by Tyler Perry (for those who are too young to remember her Emmy winning roles in the 70’s, or her role in Hoodlum in the 90’s), but in Bountiful she amazes with her unbelievable antics. Members of the audience all around were truly in awe of her talents and ability. Vanessa Williams explained it the best, “She’s extraordinary, she changes it up all the time. She’s a talented comedienne, I think I discovered that from this play.”

Do yourself a favor, catch this play before it wraps in October. It’s an experience worth having.

Meet the Cast of Starz New “Run the World” Series

Round By Round Break Down of the Brandy vs Monica Verzuz