Skip to content
Home » An Evening with the Legendary Mr. Melvin Van Peebles 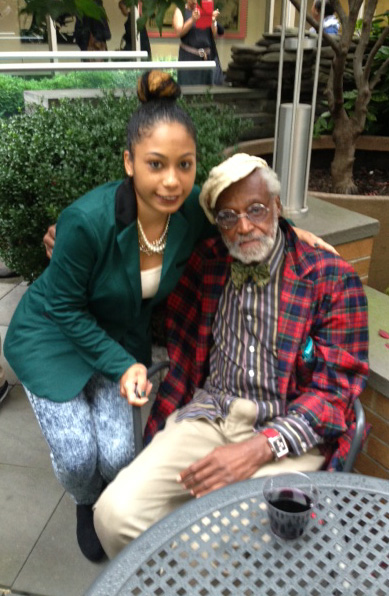 When I first got the news that I would be interviewing the legendary Mr. Melvin Van Peebles my first thoughts were, what can I, little ‘ol me ask someone so great? A man who is such huge deal, having been so influential to our, my culture?

Mr. Van Peebles’ resume is long, full and interesting. He’s a filmmaker, a composer, novelist, Wall Street trader, playwright, band leader and vocalist. He just recently decided to get into visual arts and his newest endeavour is the start and launch of a sportswear line. At 81 with abs, style and spunk, he does not plan on slowing down any time soon.

He still exercises regularly, drinks lots of red wine (which he had a glass of as we spoke) and encourages us all to “have fun!” Indeed he is not the average grandfather, he is a pioneer in the film industry, particularly a hero for African-American filmmakers and simply motivation to anyone who has ever complained on the route to success. During our conversation I listened and soaked up his wisdom thinking about how blessed I was to be in his presence.

Before I met with Mr. Van Peebles he had just finished up an intimate discussion with fans and fellow artists in which he talked about his legendary career. This includes a slew of films, his most famous being Sweet Sweetback’s Baadasssss Song, which he did with his son Mario Peebles. When asked about working with his son he said that it was clear to Mario that he would get no short cuts. He also talked about how his good friend Bill Cosby was very influential in helping him break the barrier to get into producing. At the time there were no African-Americans producing in Hollywood but Mr. Peebles achieved this, his work spoke for itself and they had no choice to let him in.

When I finally got my moment with Mr. Van Peebles I started with, “What do you live by that has you still going? What’s your secret?”

He replied, “How old are you?”

His reply? “Too young for me to tell you” He, myself and a friend of his whom sat in for our short interview, burst into laughter. But Mr. Peebles was not joking—that was his final answer. I thought it was a great one too. 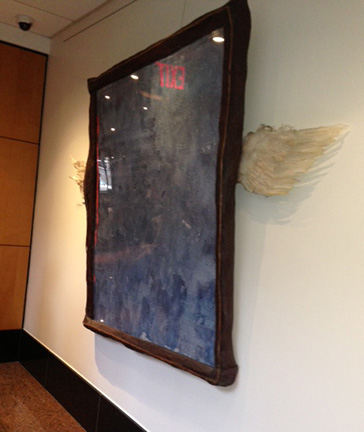 His new exhibit is stationed at Strivers Gardens Gallery (300 West 135th street Harlem NY). The exhibit is named eMerge 2.0 My favourite piece, “Ex-Voto Monochrome (A Ghetto Mother’s Prayer).” A large, blue, concrete material whose frame is bounded by two angel wings. During the group discussion Mr. Van Peebles said that the best part of the new exhibit is that he has been able to help new artists and give them a platform.

I asked Mr. Van Peebles what he would like young people to know about him, who may not be familiar with his work. He corrected me and said, “All people, not just young.” He continued, “Hopefully when things like this happen (the discussion and exhibit) more and more people will tell another and it will start bouncing back.”

So I’m telling you, yeah you, do your research if you haven’t, Mr. Van Peebles has done great work so that we may do great work.

Advice to everyone from Mr. Van Peebles, “It’s all about how you look at stuff, scars are the price you pay for success, you have to not let yourself believe you can’t.” He added, “Do what you can do within the frame work of what you have and don’t look outside, look inside.”

Check out the new exhibit, it truly is breathtaking.

Also Check Out:
Troy Taylor – Raising The Bar as a Producer & Artist Curator
Maia Campbell – Back To Own It All
Being Glenn Lewis – Motivated By The Fans
Tiara Thomas & August Alsina Headline the Hot 97, Who’s Next Showcase
Jon Jon Augustavo – Visualizing Concepts For Life