With the respect he has developed throughout the industry for his work ethic in addition to the solid records which have come out over the years via his collaborations with some of the hottest artists in the game today, there has been a sure fire stamp on 2 Pistols brand as a successful artist. His mixtape numbers have kept him in the conversation, and his resume of affiliation with Cash Money Records in the past, as well his DJ Scream assisted mixtape, Arrogant have all served as a good look for his climb through the ranks.  With a buzzing single, and plans for major moves over the year, 2 Pistols is once again on the cusp of super stardom; find out what his recipe for success is and why you should stay tuned in to what he has in store. Parlé with us, as we present the Sunshine State’s own 2 Pistols.

Parlé Magazine: Let’s go back a little bit for those who may not know you were signed to Cash Money, tell us a little bit about that.  What was that experience like for you?
2 Pistols: Yes I did a deal with Cash Money in about 2009 and we went in the studio and recorded, putting some nice material together; at that time they were going through some changes in terms of business wise and I used the opportunity to soak up knowledge, grow and finally I found myself another opportunity to move forward as an artist and get my music out there to the people. Everybody at Cash Money supported me in that, never wanting to hold me up. We definitely made some good music together, and through it all I kept working on other things on the side, and when we parted ways (on good terms) I went ahead and got to my next move which was putting out my music independently. 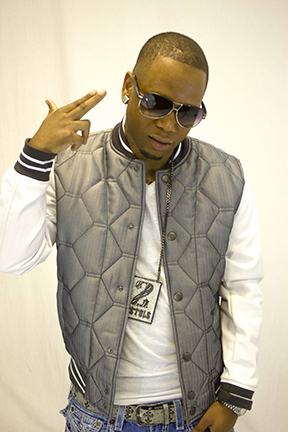 Parlé: When things fell off and didn’t pan out as you expected where did you get the encouragement from to move forward and go the independent route?
2 Pistols: It’s like that line from Paid In Full, “I love the game, I love the hustle.”  That’s me!  Although things didn’t work out with Cash Money by no means was I looking to wrap it all up so I moved forward and invested in myself and kept perfecting my craft. I felt like I hadn’t gotten the chance yet to fully paint the picture of who I am as an artist with the material beforehand, so I put a plan together to do exactly that when it came to putting out Arrogant. When I first got into the music business I always said to myself that I wanted to do something big, something different and music has allowed me to do that legitimately. I know more than the average artist does when it comes to conducting business. I have learned over the years. With Arrogant, I was able to show people how diverse I am as an artist, and that I can make different kinds of records, from street to Top 40, to club and with the buzz surrounding my latest single, people are seeing it more.

Parlé Magazine: Speaking of Arrogant, you achieved some very good success with that project, being certified Gold (250K downloads), plus in addition you worked with some very talented individuals on the project such as  2 Chainz, Fred The Godson, Trae da Truth and Verse Simmonds to name a few. How was it working with those guys? Who would you say you had the best creative chemistry with?
2 Pistols: With the project being distributed independently I felt like I accomplished so much just by getting it out. I felt like I put out a project that I can stand behind, and it ended up doing good numbers and becoming my most successful project to date, download wise. It represented me, and the process of putting it together was great. It was album-like. I did a lot, I took my time. To answer your question, I would have to say French [Montana], although I feel like there is great chemistry with all the people I have worked with. On “All I Know” the vibe between us was very organic.  That record itself wasn’t even on the project, I actually leaked it and we went on to tour with it a little bit.  Overall for me, when I have a feature it’s because I wanted that person on that record, I felt it, knew that they would fit. We vibe, we understand each other’s direction and it all makes sense.

Parlé: Maybach Music’s own DJ Scream held you down as the host of the tape, how did that come about?
2 Pistols: We actually got together to work on the project through a mutual friend who knew what I was working on, and that was cool. We actually kind of knew each other already from being out on the road, but the mutual association solidified everything. We sat down and talked and agreed that it would be a good look if we went in and put together a solid mixtape, and that’s what happened. He respected the music, and I respected what he brought to the table. Actually we are thinking about Arrogant Pt 2, something that we are exploring, let’s see. DJ Scream, that’s the homie.

Parlé: Fast forward, let’s get into your new single, “Know That,” which is building a tremendous buzz. Of course you have the homie French on there, what made you revisit that recipe again to come up with a hit like this.
2 Pistols: For me it was the right timing. My records are all about timing when it comes to putting out a single. I needed a record, and there were options, the marketing strategy is always solid and we had “Know That” with French.  Me and him spoke, and it was around the time that he was gonna put out his album, which was a good look and we spoke about what I was working on so it made sense for that to be a single, and we turned into a hit which I am thankful for. From the moment I reached out, I knew it made sense, and the homie agreed; where it has grown to has been a benefit for both of us.

Parlé: What’s next for 2 Pistols, what can the fans expect for 2014?
2 Pistols: Expect to get my Coming Back Hard project which will be released February 4th. It has a lot of good records, and when I say that I am proud of the fact that they are good records that have no feature. In this business we all do records with each other and I was proud that I could go out and stand on my own and make good records. One in particular, “Your Eyes,” which is for the ladies is something people need to watch out for. Right now we’re doing spot dates and continuing to be very active. We are in the process of putting together a tour for the new year, as well as coming to New York City real soon. So overall we’re continuing to work man.

Listen To 2 Pistols Arrogant mixtape below…

A Look At Every XXL Freshman Cover Since 2007

Revisiting The Inaugural XXL Freshman Class of 2007: Their Success & Where Are They Now

Styles P Sold Crack As A Kid Primarily For This Reason