Skip to content
Home » [INTERVIEW] Andy Mineo Reminds All, ‘You Can’t Stop’ Him

When I first heard music from Andy Mineo I was shocked that I was instantly hooked. I couldn’t believe that he had so much soul to him, but I was wrong, I guess the saying “don’t judge a book by its cover” is true. His music had me captivated and made me want to buy EVERY album he put out, which I DID! As we sat and talked I started to feel the magnitude of faith on him, it was truly encouraging. I loved every minute of it.  Check out our full conversation here…

Parlé Magazine: Let’s talk about the success of your debut album, Heroes for Sale, which sold over 28,000 copies in the first week making it’s debuted at #11 on the Billboard 200, #4 on the top rap album chart, #2 on the indie chart, and #1 on the top Christian album chart; How did you feel, with such a amazing start?
Andy Mineo: Yeah, that was the BIG kick for me; all I had was a mixtape at that point. I was traveling the country with Lecrae and some other guys, and the mixtape really played as the big build up for my first release, it ended up being the highest selling debut from a Christian rapper ever, so that was an amazing feeling. It took us by surprise, I couldn’t believe it because those where the numbers Lecrae got on his forth and fifth album; but for that to be my first album, it had us like, “Whoa this is moving a lot quicker than we thought.” I have to credit Lecrae and the other guys because they laid the foundation and reached out to their fan base and said, “check out Andy,” so it felt amazing and I am very grateful.

Parlé: I must say, Andy your style is very different; it’s creative, honest, and alluring. You truly have a way of bringing in listeners into what you’re rapping about. I know you’ve been rapping since a youngster, but when or how did you find the right sound for you?
Andy Mineo:  I think I was starting to find it on Formally Known the mixtape, that was around the time when I was coming in to the aggressive rap battle scene back in 2011, I kinda brought some of that style into Heroes for Sale, still kinda fumbling around with it, trying to see if I want to sing a little bit, finally on Neverland I feel like I found my niche. The artist I want to become long term is  someone who is able to walk the middle line and be able to encourage folks on both sides, so the people who agree with my message and understand my message I want to encourage them, love them, serve them; for the people who never heard my music and don’t agree or understand my message, I want to create something that is inviting to them because I don’t want to exclude anyone, I want everyone to enjoy the music and I think Neverland is a good blend.

Parlé:: With your debut album, Heroes for Sale you’ve worked with several artists, one of them is fellow Christian rapper Lecrae, what was the experience like?
Andy Mineo:  He’s a beast man; it’s always good to connect with him. He’s passionate, he wrote this verse for “Uno Uno Seis,” that I didn’t like, he didn’t like and he went back and scratched the whole thing and did a second verse. It’s rare that you would find a guy who is so critical of their own heart that they will be willing to make the changes, and scratch it and do whatever it takes to make sure the record is really good. I’m grateful that he did that; he’s like my big brother, my mentor and friend, so it’s always good and it’s an honor to have him on a song. Before I even met Lecrae I was a fan, so now that were friends and to be able to make music with him, has me like “WOW.” 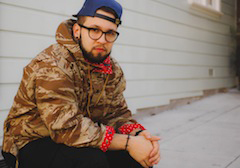 Parlé: Andy you’re a man of faith, do you feel that more artists that have the same platform as you do should speak more about the love of God or even sing/rap more from an inspirational standing, other than just showboating the drugs, sex, and violence of life?
Andy Mineo: I can’t judge anybody else on what they want to create or on what they choose to rap about, all I really have control over is myself and my music. What I want to do with the platform, that God has given me, is give the listeners hope, encouragement and show them the transforming power I have experienced from God in my own life, I want to show them how he’s changing me and working in me and invite other people to come in me and meet this guy I’m talking about for themselves. That’s how I want to use my platform, to create relatable songs that show people my failures, my weakness, and my frailties but show them that I still have hope in the midst of all of that through God and I think Hip-Hop for something different other than sex, drugs, and violence.

Parlé:  Bringing things up to date with your new release Neverland, can you tell me what you want listeners to take from this EP?
Andy Mineo: It’s kind of difficult to say because each song I want someone to take some special out of it. For “Neverland” I want people to take away “success and fame is empty and to pursue it is a vain pursuit” like if you try to find satisfaction in anything else we’ll remain unsatisfied. For “Paisano’s Wylin” I want them to be able to have fun, laugh, be entertained and be silly. For “Paganini” I want to show people that doing things in the excellence for the glory of God is ok, to demonstrate your abilities and to be all that God created you to be and give him credit for it at the end of the day and that’s a blessing in itself.  On “Death of Me,” I want people to understand me, to feel my heart, understand where I’m coming from, the struggles that comes with being a musician full time and trying to reach to the culture and reaching people lives. I want to understand what the journey is like for me, traveling the world and doing this for a living. So each song has it’s on purpose, I can’t really go through the whole album, but if you buy it I promise you’ll get something out of it.

Parlé:  “You Can’t Stop Me,” is one of my favorite tracks off the album; its real and filled with tons on inspiration, it definitely lit a fire in me. What was the inspiration behind the track?
Andy Mineo: “You Can’t Stop Me” was meant to be a fun and silly record but at the same time the message behind it was the person that can stop us from achieving our goals is usually ourselves; not the people telling us no, or saying we can’t do it but our own disbelief, our insecurities about failing that stops us.  I wanted to encourage people to tell that to yourself, “you can’t stop me.”

Parlé: As a Christian rapper, do you ever get ridiculed for your lyrics? I mean because they most definitely come hard and can be held up to any of these mainstream rappers, so I’m just wondering if you ever get heat because of it.
Andy Mineo: I haven’t got much flack about my lyrics, well not that I heard of, but I have gotten my music is a “little to preachy for me” on some of my earlier work. I can say some of my critics have come from people in my circle. They say “I want you to push harder, go farther, I want you to expand your vocabulary, and try to expand your punch lines.” People  in my community, that listen to my music always push me to be better, that’s why I keep growing as a writer.

Parlé: Andy you became a entrepreneur at such a young age, besides conquering the rap game, are you working on anything else?
Andy Mineo: Yes I am, I’m working on a lot of things. I working on a children’s book, which is based around this character named Zero, who is from the Heroes For Sale album. I am working on a clothing line, which you can see on my website. I’m also working on some websites and starting some small businesses, which I’m really excited about, also looking forward to doing a YouTube channel which would document my life as an artist.

Parlé:  Can we expect a music video for your new single?
Andy Mineo: We’re actually working on that as we speak, were going to be shooting a video for two songs for the Neverland Ep.

Parlé: Last but not least Andy, what advice do you have for any of your fans who are also trying to pursue his or her dreams?
Andy Mineo:  Remind themselves that “YOU CAN”T STOP ME.” There are a few things that you can refer to when thinking about what’s your calling in life. 1- Affinity (Do I love what I’m doing, do I have a passion for it) 2- Opportunity (are there opportunities for me to do what I love, and what you are excited about) 3- Capability (are you good at it, do you have the natural skills or ability to pick the skill up) 4- Community (the people around you that know you well, see the skill in you and affirm those things and push you towards pursuing it). If you’re pursuing your dreams, I would be looking for those things; a LOVE for it, a OPPORTUNITY for it, a CAPABILITY for it, and AFFIRMATION from the people around you who see it in you.

Todd Dulaney Opens Up About His Sophomore Album & Life Before Gospel