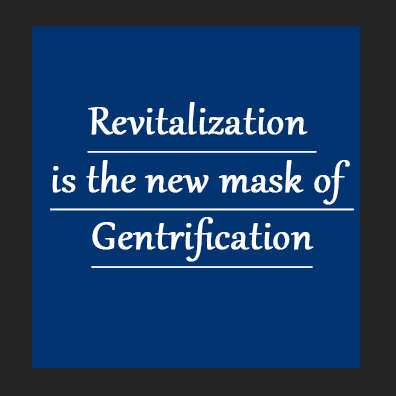 Gentrification can be defined as the upward change in land use to middle and upper income residential. It is also defined as the upgrading of devalued urban property by the middle class or affluent people. We see gentrification happing all around us on a daily basis now but it has garnered a new term that is revitalization. Gentrification or revitalization is a common issue in urbanized communities around the nation. The presences of gentrification began to become common in the United States around the mid 1970’s. Many factors feed into the existence of gentrification. Which result in numerous social and economic consequences. The process of gentrification sets off a chain of positive and negative effects. While the question that goes unanswered the majority of the time is, can gentrification have a long-term stability or more conflict from the socioeconomic differences between blacks and whites?

The economic factors of this new form of gentrification remain the same the only change is the name. These factors are still linked to politics, the powerful land based interest groups and affluent property owners still place intentional neglect on inner-city neighborhoods. When you see neighborhoods that have boarded up houses and vacant lots sitting idle for years this is a planned process that drives down the market value. It is also done to insure the policy changes that the powerful land based interest groups support will yield tremendous profits. Then policies change accordingly with little regard for the powerless inner-city residences that will be displaced from their homes. This is normally done by rent gaps; the rent gap is the difference in property values in depressed areas before renovations and after renovations according to Neil Smith’s rent gap theory. When the rent gap is large, enough investment money is pumped into dilapidated areas. According to smith, the government amplifies this effect through various zoning, financing, and fiscal practices.

The social spin that has been place onto gentrification covers a wide range of ides none of which can really be sold to those who are adversely affected by the displacement. The search for cultural diversity is recognized as one of the key factors that inspires the migration of upper-income groups to the inner-city neighborhoods. These higher income highly educated adults that move into the revitalized inner city neighborhoods are able to emerge themselves in pro-urbanism looking to gain acceptance of alternative lifestyles. These groups are also trying to relate to the different ethnic and racial groups by taking responsibility for social injustices. While low-income and minority groups have been vulnerable to the effects of gentrification primarily because they lack the knowledge to recognize the phenomenon in its wake, and the unity to confront it head on.

The powerful land based investors see gentrification as a positive the rely on data showing lower crime rates, higher tax revenues,ascetics, poverty de-concentration social motivation and overall civic improvement. While the other side of that is neighborhood, reconstruction boils down to displacement and racial discord. Although there are ways to fight against gentrification and not just accept the displacement. Making housing available for low-income people to avoid the high volatility of those individuals, while at the same time strengthening and preserving affordable housing, with more social housing through the community development block grant (CDBG). Bringing in resources into the neighborhoods good schools good services, the assurance that most public subsidies reach the lo-income families. Making accessible job training and job opportunities also skill trade training, with tools like these the black community would have a better chance of renovating g their own community.

Revitalization or gentrification is a double-edged sword. The benefits make it a welcomed occurrence and a necessary one for property owners and land investors. Although the residents that are displace by gentrification go unheard and un-noticed to this dreaded phenomenon. If the black community does not come together soon there will be no more historic neighborhoods that we can show the younger generations. There will be a part of our history that is lost or rewritten for years to come. For true change to take place, the low-income groups, which are majority blacks, must speak out against these injustices, which have an adverse effect on their well-being. It is time be honest and clean up our own neighborhoods and take pride in ownership.

Also Check Out:
Wheelchairs Against Guns, Making a Difference
Orecchiette with Smoked Prosciutto and Kale recipe
The Emergence of Anthony Lewis
Martin Lawrence Teams Up With Kelsey Grammer In New Series, Partners
Suveria Mota – Talent From Washington Heights to Hollywood