As 2010 concludes, we look back on this past year with wonder and amazement at all the events and milestones that have taken place. From Wiki leaks to Chelsea Clinton’s Wedding to Trapped Chilean Miners, the Tea Party, Toyota Recall, Historic Unemployment to the BP Oil Spill; 2010 has made it’s mark on history as a year of change and challenge.

Given all of these worthy candidates for the Top Story of 2010,  it still wasn’t difficult to choose a deserving winner. For me, its the horrific earthquake that shattered  Haiti.

Back on that cool January morning, nearly three million lives were changed forever.  As the ground completed its violent shake and the bellowing dust had finally settled, an estimated 230,000 people had died, 300,000 had been injured and 1,000,000 made homeless.  The human loss is beyond comprehension and the socioeconomic impact on that impoverish island is a nasty counterpunch to an already dire situation.  It’s estimated that 250,000 residences and 30,000 commercial buildings had collapsed or were severely damaged leaving Haiti’s infrastructure in ruins.  Today, almost twelve full months after this historic natural disaster the country is still struggling to recover.

As the history pages turn towards 2011, piles of rubble still choke the countryside making rebuilding efforts a formidable task. The once robust outpouring of vast amounts of promised aid has been slow to arrive and once it does, the Haitian government has failed to effectively distribute it.

Prior to the quake, only 17% of Haitians had access to sufficient sanitation. The events since then have only exacerbated an already bad situation. 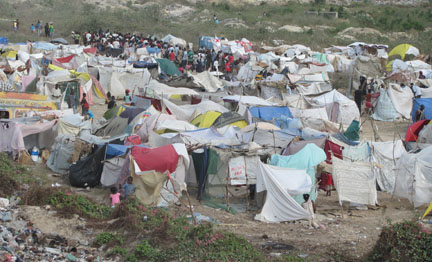 Today, many Haitians are living in unsanitary tent cities with limited food and water supplies.   These camps have rapidly deteriorated into slums that are breeding the water borne disease ‘cholera’. Victims suffer from diarrhea, vomiting, severe dehydration; and many die quickly. To date 20,000 people have been infected and over 1500 people have died.

Given all of these mounting challenges, the outlook for Haiti has not improved.  It’s getting worse!.

Although people of good will have tried to make a difference, the need continues to be great. Thus more people need to go back to that cool January day when they watched in horror as this poor Caribbean island was torn apart.  Remember how you felt.  Remember what promises you made.  Remember  how you wept for the lost children and anguished over their pain. Remember how you swore to get involved.

Now act on those promises.   It’s still not too late!

Or have you forgotten Haiti?

To reconnect with the mission to save Haiti access any of the following links:

These organizations continue to accept SMS donations in the US only:

When It Comes To Wyclef, Haiti Needs To Reconsider, Immediately