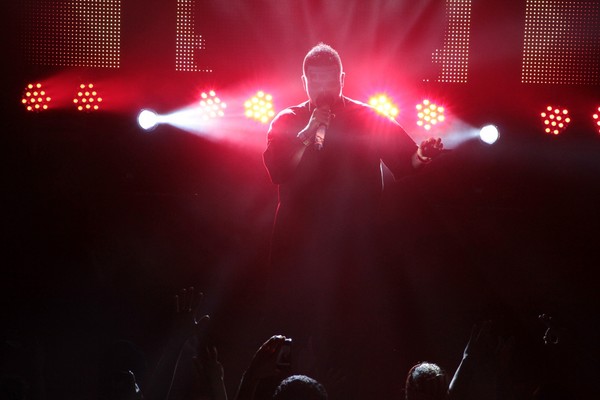 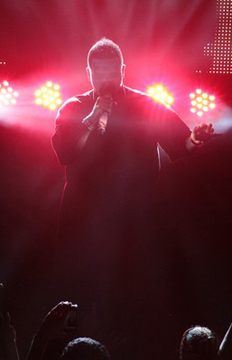 Last night Tech N9ne performed for his New York fans at the Highline Ballroom, the latest stop on his Hostile Takeover Tour.  The name of Tech N9ne’s latest release is the EP Klusterfuck, and that title sums up the mix of energies he brings to his stage show.  There’s the metal influence, the beats invoke mosh pits, body surfing and the like, Tech encourages the behavior, even halting his set for a brief moment to indulge a fans request to let him perform a few back flips on stage.

There’s the dirty south influence, with girls flashing as Tech invoked his inner Luke, goading the crowds with chants of “Areolas! Areolas!”  At the core it’s still Hip-Hop, Tech opens the set with the video of his BET Awards cipher playing behind him as he demonstrates why he is one of the most technically gifted MCs in the world.  Even when performing his quicker paced songs such as the crowd pleasing “World-Wide Choppers” Tech manages to hit every syllable with immense precision, a stark contrast for the norm of the modern Hip-Hop show, in which the performer stumbles through the performances, taking numerous pauses as the vocal track picks up the slack.

The warm up band and latest addition to the Strange Music label Mayhem also invokes the same fusion of genres.  The guitar solos are here, the angst ridden alternative rock style choruses are here, and all members can flow, they even took time during the set to spit at about a billion bpms over the instrumental to Chris Brown’s “Look at Me Now.”

It was unfortunate that the tour’s other main draw Machine Gun Kelly, was banned from performing as per Highline Ballroom management, the reason rumored to be his alleged attack of a club bouncer in Florida and anxiety about urban music in general due to the Chris Brown & Drake club incident which took place last week.  The crowd was at a ten already and an MGK would have definitely pushed them into delirium, which is a GOOD thing for a Hip-Hop concert.

Note to venue owners, instead of being tentative with Hip-Hop acts, maybe you want to embrace it, you will sell more tickets and infinitely more drinks than at a low risk laid back Jazz concert.  I know you may be afraid that violence may occur but realize its 2012 and not 1988.  Check patrons and IDs at the door, eject trouble makers and you will be fine.  Stop being a pussy and give Hip-Hops fans a chance to enjoy and be themselves while spending money in your establishment.

Rant aside, even without MGK, it was an excellent show, as expected of Tech N9ne and Strange Music.  Well planned and executed Klusterfuckery with enough spontaneity to keep things interesting.