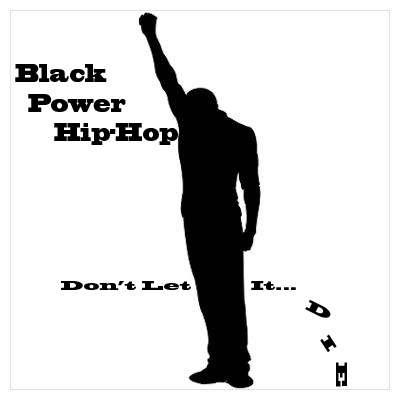 Hip-Hop has been nothing short of a massive inspiration to pop culture since… let’s say the late 80s.  I had an acquaintance once tell me that he was unaware that there was any good Rap music.  Aside from the blatant idiocy of that statement, it brought back unwelcome memories from my younger years.  I’d heard this hoopla several times in the past from a certain type of person.  They usually have pasty skin, vote Republican, and harbor all sorts of other hideous delusions.  Listen buddy, you asserting that there is no good Rap music out there is like me asserting that I’m a goddamn Power Ranger, which I assure you I am not.  Additionally, how are you going to ‘dis’ a genre of music that’s older than you are?  It’s a bad look, homeboy.  Not only do I and every other non-troglodyte disagree with you on this point, but I’ll take it a step further.

I expect that were I to bring this up to a black Hip Hop artist he would tell me that nearly all Hip-Hop is Black Power.  Don’t get me wrong; Nas is a monster on the mic, but he seems a little more like Sammy Davis Jr. than Marcus Garvey.  I’d trade 2-Chainz for a modern Public Enemy any old day of the week.  Dump Wacka Flocka Flame and give me KRS-ONE.

Let me make something clear to you, children.  This is not about me having grade school nostalgia and wanting to go back to hearing some angry black guys doing the “angry black guy thing.”  Tupac and Biggie did that with the skill of gods, but I’m talking about highly informed MCs telling us what they know, how they feel about it, and how they think it will play out in the future.  I’m not saying they aren’t out there.  Talib Kweli, Mos Def, and The Roots are still releasing excellent music, among others.  Erykah Badu is still a total badass at age 41.

The catch here is that these artists are aging and there don’t seem to be many young Rap titans coming out to take their place on the throne.  A lot of these rappers are hard as hell, but they seem to dodge the issues more than they address them.  Did racism go away?  Of course not.  Have all police cleaned up their act?  I don’t hang around when they enter the room, but I’m guessing it’s a ‘no’.  Are inner city schools safe and enlightening places for black students now? I doubt it.  Do harmful street drugs still plague black neighborhoods, damaging the quality of life for everyone involved?  You tell me.  Are black people paid as well as white people on average?  I think you see where I’m going with this.

So, who’s left?  Unfortunately, there’s only a single major playing young duo representing this glorious style of unabashed Hip Hop rebellion, at least to my knowledge.  They met in Tallahassee, FL and have been wrecking it since 1996, when they formed in New York City.  They’re MCs, producers, martial artists, socialists, philosophers, vegan health gurus, black militants, and relentless potty mouths.  They are Dead Prez and they do not trust you, peckerwood.  Their style is wildly confrontational and they don’t care if you have a problem with that.  They are also roughly 80 million times smarter than you.  How smart?  Allow me to give you a taste.

The intro to their first album ‘Let’s Get Free’ (2000) is an absolutely stunning monologue from Chairman Omali Yeshitela of the International People’s Democratic Uhuru Movement, set to Hip Hop beats with the sound of wolves howling in the background.  From there it slides straight into ‘I’m A African’ with lyrics like “The red is for the blood in my arm, the black is for the gun in palm, and the green is for the charm that grows natural, like locks on Africans” and “I’m a runaway slave watchin’ the North Star, shackles on my forearm…”  Throughout the entire album they lyrically rip the system a new one by criticizing the school system (‘They Schools’), the record industry (‘Hip Hop’, which was the theme music for Chappelle’s Show), the government (‘Assassination’), the prison system (‘Behind Enemy Lines’) and of course, the white man.  Their threats of gun (and incidentally, kitchen knife) violence are extended not only to the police and caucasians in power, but also to black people who might attempt to hurt them, their friends, their families, or their community.  Their grasp on community and national politics is astounding from the get-go.  They are viciously opposed to the objectification and marginalization of women.

In 2002 and 2003 they cut a pair of “mixtapes”, mostly comprised of instrumental tracks from other artists with fresh Dead Prez Lyrics dubbed over them.  ‘We Need A Revolution’ is one of the many gems on ‘Turn Off The Radio: The Mixtape Vol. 1’ and is taken from Aaliyah’s ‘We Need A Resolution’.  The lyrics that can be found here are along the lines of “What I gotta do? Kidnap Aaliyah, take a melody? Make it relevant? Hold a harmony hostage…” and “It ain’t no loss, love. Freedom cost blood.”  ‘Get Free Or Die Trying’ had a easier tone through most of it, though ‘Fuck The Law’ and ‘Paper, Paper’ were barn burners.

2004 saw the coming of the original album ‘Revolutionary But Gangsta’, in which they took on a more modern sound and actually had songs covering topics ranging from how to get in shape the fun way (dice for push-ups) to specific methods of ripping off the system through food stamps and identity fraud.  They recorded a second version of that particular track with the grand master of all things badass, Jay-Z.

The tough news is that Dead Prez, despite their continous output of material, seem to be carrying the weight of the Black Power Hip Hop movement on their mighty shoulders alone.  Seems pretty unfair, doesn’t it?  ‘Far From Over’ expresses a certain frustration with this situation in the lyric “I swear it feels like the last few years, in the mainstream, everyone’s forgot about reppin’ the cause.”

It isn’t just the lyrics, though.  It’s the sound.  So much of current radio Hip Hop sounds more like “If you’re happy and you know it” than “I’m black and I’m proud.”  Where’s the energy?  Where’s the revolutionary spirit?  Maybe I’m asking too much.  I don’t know.

Surely by now you’re wondering “Why the hell does Ben, an Irish-Chinese-Native American mutt, give a damn about Black Power?”  The short answer is… I’m not sure.  It might be that basically all Black Power advocates are yelling Brown Power as well.  It might be a memory-based feeling of anti-climax.  It might be my long standing love affair with the idea of revolution.  Last, but not least, it could be me clinging to a deep-seated immaturity that I won’t ever be able to live down.  However, I do know beyond a shadow of a doubt that reviving Black Power Hip Hop would be beneficial to more people than just me.  Dead Prez, Kweli, The Roots, KRS-ONE, and countless others taught me a lot about how much people could potentially grow if we just put our worries aside and trained our minds.  These are brilliant musicians and thinking individuals who came from poverty (at least most of them) and made a mark on the world.  Finally, I will say that the main reason I care about Black Power Hip Hop is that it is beautiful.  Not accidentally, but objectively.

While visiting relatives in Manhattan in 2004, I was stopped on the street by a guy who wanted to plug his Hip Hop group.  He said something like “We don’t rap about money and we don’t objectify women.”  I wrote down the name of their website and looked it up when I got home.  The site had a miniscule amount of info on their band and no sound samples.  I was hugely let down.  I have since forgotten the name of the band, but not the encounter.   To this day, I still wonder what they did rap about.

Turn off the radio and keep it off.

Also Check Out:
A Loose Quarter – Track by Track Joe Budden review
The Child Support System is Due For A Change
Where Have All The Hip-Hop Executives Gone?
Information Age – Dead Prez album review
J. Cole – “Miss America”