From inception into the Hip-Hop game as a member of the Three-6-Mafia movement in the early 2000s to his most recent joint release, No Filter with Nashville, Tennessee mainstay Jelly Roll, Lil Wyte is certainly as authentic as they come. I had the pleasure of sitting down with Mr. Memphis himself as we kicked it about his following, live show antics, his latest release, relationship with Juicy J and DJ Paul, and more. Check it out exclusively via Parlé Magazine:

Parlé: So how did the Union come about between yourself and Jelly Roll ?
Lil Wyte: Me and Jelly have known each other for about 8 or 9 years. We did a track together back in 2009 called, “Poppin of the Pill” and we figured out we had good chemistry.  We went our separate ways as solo artists and we both have been pretty successful.  This time around it was actually my manager’s idea for us to reunite. He suggested that we do more than just a song. You know, give our fans an entire project. I flew out to Nashville, and we went right in.  We got the album done in 6 days; we just kept coming up with good stuff

Parlé: The concept for Smoke & Get High is somewhat self explanatory; you mentioned that suggestion from your manager to put together an album. We all know that in this business that is not always enough, where did the ultimate encouragement come from, or reassurance if you will, that it would go over well?
Lil Wyte: The fans that we have. We’ve toured together, and the people loved it.  It’s a great combination. Jelly is known for his trap influence and flow, me the people love it for the trip, the drugs to keep it real.  When we sat down we mapped out a way to give the people a good variety of it all.  This year made 12 years in for me, I wanted to show versatility. Crunk, Gospel, Rap, you can find all of that on the album. We couldn’t just settle on one or two concepts .

Parlé:  What’s the significance behind the title of the album, No Filter?
Lil Wyte: The fact that we dont give a f*@k, plain and simple. It’s basically Frayser, Memphis, Tennessee versus Nashville. That IDGAF attitude as a result of the places that we have grown up. Let’s be honest, we haven’t ever really hit major radio, or mainstream but we have a big fan base and that’s what keeps us relevant. We do it for them!  Funny thing is me and Jelly actually fell out for a few years, we address all of that on the album. We both understand that it’s a business, and we are back as brothers, with NO FILTER.

Parlé:  Who did you work with on the visual for your new single “Break the Knob Off”?
Lil Wyte: Shout out to Tyler Davis and Doug from Nashville. They are sick. Also Select-O-Hitz, Wes Phillips shot half. Real dope.  Wes is the head buyer at Select-O-Hitz distribution center, and he works with me as manager because he likes to be hands on in this music game, hitting the road with me and all.

Parlé: You recently wrapped up dates on the Abominations Tour Part 3 with Twiztid, how was that?
Lil Wyte: Phenomenal. I went out on the 1st leg like November/December 2012, by myself; I was invited last minute. I told Wes that if I could get invited back on the 3rd leg I would turn up. We talked to Jelly and said lets combine our show, incorporating the album. I came back with a full crew, tour bus, merchandise, everything and went hard.  Shout out to Twiztid he is so humble and cool as hell to be a part of such a big movement with the Horrorcore and all. Most artists when they are out on tour come in rock out and leave. Not me. I slammed my tour bus in the camp grounds, I was the 1st one on the scene. I was in there, stage diving to a crowd of 10K. Last year when I went I had just gotten over back surgery, and I promised the fans that if I got invited back I would make up for it: strippers, weed, the works. 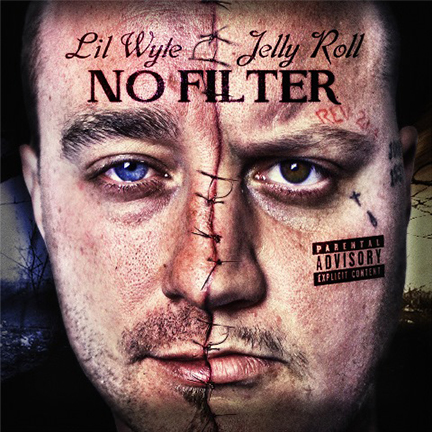 Parlé:  What can your fans look forward to going forward?
Lil Wyte: I know for a fact we will be shooting 3 more videos off of the No Filter project. We just put one down recently, real country and organic, farm setting, cancel balls. We’re going to shop it to CMT and represent that bluegrass roots side of it… We actually have 2 singers on there, who come from a background of royalty country music wise. I’ve never been a huge fan of country music, but I get the demographic plus I’m white as f*@k; I am country. I lived in the hood of course but I also spent a lot of time at my God brother’s house riding 4 wheelers, doing good ol’ boys shit (laughs).  We threw in the Dukes of Hazzard sample to set the table as well so it all makes sense. I can play both sides but when it’s all said and done I dont wanna confuse anyone—I am Hip-Hop. I am Memphis. Shit I ate at Smiley’s last night. We’re gonna push No Filter for the next couple of months and see where the response level is at. We’ve spoken about Part 2, but it’s all about timing and response. As long as we’re making money, and touring I don’t see no reason why not do a Part 2.

We are planning a 10 city tour starting Oct 11th running through the Midwest. Me and Frayser Boy are putting the B.A.R. album together, we’ve been talking about that for a while now. Thinking of dropping December or January, I am beat shopping now for my solo project No Sick Days, which will be out next year. My plan is to be on Juicy J shit.

Parlé:  Speaking of Juicy J, as well as DJ Paul, how is your relationship with them now-a-days?
Lil Wyte: I speak to Paul and Juice often, and they both loving what I am doing. They both have told me that they are proud of me, and likewise I’m happy for what they are doing. Juicy is tearing it up, and Paul is getting the whole Mafia 6 movement back in order. I’ve taken everything that have taught me over the years and applied it.  Say what you want, but they started an empire. Three-6 had a 15 year run, and right now they are reinventing the movement for another 10 year run; it’s a blessing to be apart of it.

Parlé:  Anything you wanna leave the people with in the form of shout outs?
Lil Wyte: Shoutout D Stonerz, Jelly Roll, the whole Nashville, Memphis, Mafia 6, Twiztid, Shakey, Wes, Select-O-Hitz, I appreciate you all and all the fan support. That No Filter tour will be rolling out soon.