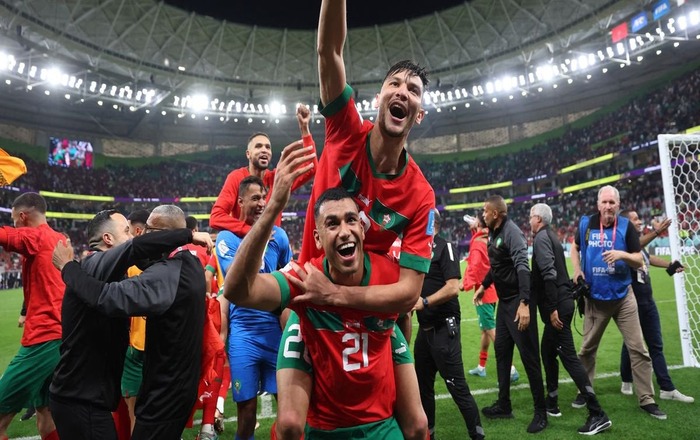 If you weren’t aware, recently Morocco defeated Portugal in the 2022 World Cup Quarter Finals which made the underdogs the first African nation to move on to the tournament’s Final Four. The feat is such a big deal that even French Montana celebrated amongst a crowd of cheerers in NYC’s Times Square.

Born in Casablanca, French Montana joined a fervent crowd of soccer fans on Saturday evening in Times Square to root on his home country after their epochal victory. The “Blue Chills” spitter was captured in footage standing on top of a structure, waving a Moroccan flag, and beating on a mini-drum. Frenchie partook gleefully in the festivities, as he chanted along in his native language with the sea of aficionados while grooving to the music.

Team Morocco endured an unprecedented and unanticipated road to the World Cup Final Four. After advancing out of a group play that included Croatia, Belgium, and Canada, in a round of 16 Morocco took down Spain. They then beat Portugal in the Quarter-Finals and made World Cup history by being the first African nation to be one of the four final teams. Montana even trolled Cristiano Ronaldo online following his country’s win.

Fire emoji and all, French Montana posted to his Instagram :“LEGENDARY ON ANOTHER LEVELLLLLL HAMDULILLAH fire emoji FIRST AFRICAN TEAM TO EVER MAKE THE SEMI FINALS !!” The Grammy-nominee then tossed salt in the wound, calling Ronaldo out while suggesting that the Moroccans’ triumph was destined to be. “Ronaldo u had your time g … it’s Morocco time lol.”

On past occasions, French Montana has shared his fondness and pride of his Moroccan roots—and this time it’s the grandest.