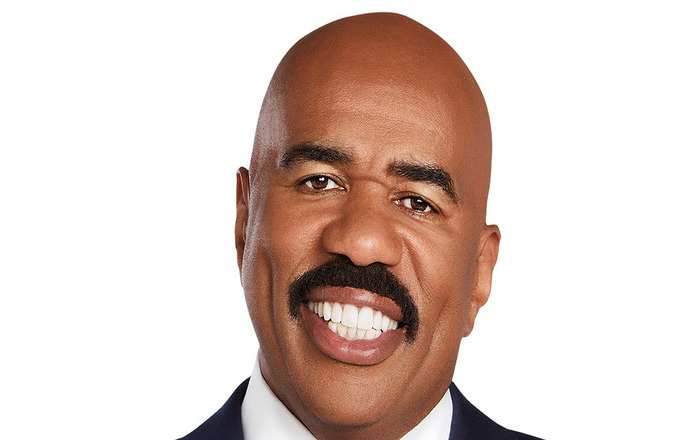 Skip the television game show — evidently, talk show host and legendary comic Steve Harvey is caught in the midst of a true life ‘Family Feud!’ According to an insider, Harvey has a complex family dynamic and all of the strife in the household is beginning to weigh on The Steve Harvey Show star.

An insider source informed Radar Online that Steve Harvey is having a very difficult time handling his new family dynamics and the tension in the household is so thick you can cut it with a butcher knife. The insider said: “Steve’s got four biological kids with two previous wives and three step kids with [his present wife] Marjorie — They’re driving him crazy!” Harvey shares a son (Broderick) and twin girls (Karli and Bradi) with his first wife (Marcia). The actor shares a son (Wynton) with his second wife (Mary Shackelford). Plus, he adopted three stepchildren (Lori, Morgan, and Jason) with his current spouse (Marjorie).

So yes, the Kings of Comedy star has seven children total. The insiders alleges there has been some envy persisting amongst the siblings as a result of Lori‘s intensifying celebrity status, as they feel she ‘took over the spotlight’ with her Kardashian-like love life (e.g. Michael B. Jordan, Damson Idris, etc.). When the Act Like a Lady, Think Like a Man author adopted Marjorie’s three kids, surely he wasn’t thinking his domicile would turn into Love & Hip Hop.

The insider went on: “He did the right thing adopting Marjorie’s kids and loves them like his own, but there’s a lot of dissension among the blended Harvey clan.” In addition, the Showtime At The Apollo host’s former wives are “butting heads” with Marjorie because supposedly his third spouse “rules the roost.” Steve Harvey may host Family Feud, but it appears he has to remedy the feud within his family—and fast.

10 Male Singers of TikTok You Should Watch Out For