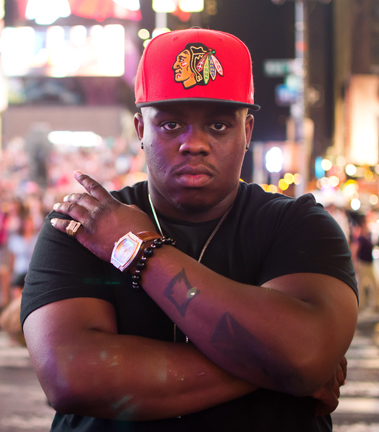 Mic Blaque, Brooklyn’s born engineer and rapper is reconstructing the Hip-Hop industry. Inspired by his upbringing as well as Hip-Hop heavyweights Nas and Raekwon amongst others. The passionate lyricist took a minute to speak to me about his mixtape, The Twilight Zone as well as his beginnings in music.

Parlé Magazine: First things first, tell me about your beginnings in music?

Mic Blaque: I began music basically growing up around my brother, he was an artist himself. I was just rhyming, putting words together sometimes even making up my own words as long as it rhymed.

Parlé Magazine:  Who/what are some of your musical influences?
Mic Blaque:  Well I have a Caribbean background so some are Curtis Mayfield, Bob Marley. Also Nas, Raekwon and now even Jay Electronica. Just growing up in the hood, even watching some of my friends pass influenced me to do something positive.

Parlé Magazine:  What’s the inspiration behind the new mixtape Twilight Zone?
Mic Blaque: Basically just being hungry, I want people to hear me out. I’m a new person. This new project just represents a new me, a new sound and new everything. It’s just me.

Parlé Magazine:  Talk about your newest single “Snap Back” ?
Mic Blaque: I really just used the name to draw people in. Like the whole thing with Snap Back’s coming back and everything. The inspiration was seeing young black youth walking around looking so angry , looking like they were ready to kill each other. It’s just a song just to say to them relax and just live life. Life is beautiful and we should take time to enjoy it. A song just to make people feel good.

Parlé Magazine:  How important is your upbringing on your music/influence?
Mic Blaque:  As an engineer I came across a bunch of people from Brooklyn and I never really understood why People would always rep where their from so much. It wasn’t until I sat back and researched and finally understood how important it is to be an MC from New York. Also listening to other musicians like Nas seeing how he showed the aura of where he’s from, just made me appreciate where I’m from.

Parlé Magazine:  Are there any other things you want to jump into?
Mic Blaque: I like fashion, I like how everyone is being an entrepreneur, putting cool designs on shirts. So that’s something I’m thinking about possibly coming at with a t-shirt line.

Parlé Magazine:  Thank you for your time, Good luck with everything.
Mic Blaque: Thank you, No problem, God Bless.