Mention the city of Prague, and if they’re well travelled, most people think of communism, Eastern Europe and maybe the picture of the collection of parliament buildings known as “Prague Castle,” which epitomize the enchanting architecture here.  But there are a few myths to be blown in that summary.  First of all, Prague is in Central Europe, not East!  It may have formed part of the ‘Eastern block’ countries during the cold war, but Prague was west of most of them.  Secondly, Prague castle isn’t a castle at all.  It’s a church surrounded by some fine parliamentary offices, with a royal-looking gate entrance.  But the enchanting architecture bit is spot-on.  That’s why everyone who comes here remembers it.

From the beautiful National Theatre (picture above) building to the church at Vyšehrad and Charles Bridge and its ‘powder towers’, there aren’t many cities with such abundance in decorative design and old-fashioned beautiful architecture.  You need to see it to believe it, as it often seems as though perhaps it were just part of a film set.  There are flourishes of art nouveau design on many buildings’ façades including the gilded entrance of the Goethe Institute along the river and the ‘Obecni Dům’ building, east of Wenceslas Square.  A walk along the river or among the winding cobbled streets at night provides a very romantic atmosphere for any traveler.  And, for that reason, Prague has been the location of choice for many action film scenes from Mission Impossible to Bad Company and The Bourne Identity.  Everyone wants a cobbled lane and decorative street lamps as their backdrop to being chased or someone getting shot, to even things out, presumably.

To experience the real Prague, however, you need to know a bit about its history; what it feels like to live in a city which has been under both Austro-Hungarian, German and most recently Russian rule.  The Czech Republic itself has only been an independent state since 1993 and only formed as an independent country (as Czechoslovakia) in 1918.  As a Brit living in Prague now, I was surprised to find that some aspects of communist attitudes remain and the general outlook today is not entirely dissimilar to that of the working class in the UK circa 1990.  There is the same assumption of lack of choice in life, the same despondency around the idea of social mobility, and the same bad wallpaper from the 70s in your grandma’s house.

The difference is, some of that despondency and lack of choice remain unquestioned here.  Take, for example, the difference between a genuinely Czech café compared to a typical American chain one.  You can happily order a coffee with semi skimmed milk or maybe even skimmed milk in an American chain, but in a Czech cafe, even the top-notch ones such as the elegant ‘Kavárna Slavia’ which overlooks the river on the East side, you’ll get a blank look and a shake of the head.  “Why would you need semi-skimmed milk in a coffee you’re only getting as a treat – because surely you can’t afford to do this every week, much less every day, can you?  That would be such a waste of money!”  These are the prevailing thoughts, which I can hear just as easily spewing from my grandma’s mouth as from any Czech on an average income here.

Putting this aside, the city of Prague has become a tolerant haven for people from all walks of life, because, quite frankly, it has seen it all.  The Germans came and went.  The Russians too.  Now it’s flooded with Americans, Brits and the Irish, some of whom have lived here for over ten years and barely bothered to learn the language.  It’s a free-for-all.  Come and take what you can get.  But you’ll pay through the nose if you’re on a Czech salary and you want an international standard of living.  You want healthy food?  You had better go to specialist organic shops known as ‘bio’ shops.  You want to read foreign magazines?  Then you’ll have to pay three times the price of a Czech one. 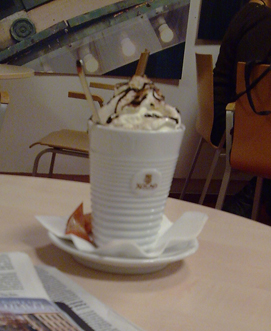 The best solution is perhaps a mixture of the purely Czech and the inherently foreign.  If you want a really good hot chocolate at Czech prices in an ordinary setting where you can sit and read, head for the cafe on the second floor of the Palac Knih Luxor bookshop on Wenceslas Square.  It’s not only creamy and delicious but it’s less than $2.50 and its European sized so there’s no worries on the dieting front unless you go here every day!  For a more ex-pat experience, one of the best places to go would be the cafe at the Globe bookshop in Prague, where the café is bigger than the bookshop and you can bump into Anglophiles from all over the world.  It’s a bit dark and moody, but that’s why most people like it.  (And they happen to also do a great bowl of chilli, should you be in a ‘Columbo’ sort of mood.)

As for ‘doing as the Czechs do’, you could always try a beer brewery restaurant such as the one called, ‘Pivovarský Dům’ (Brewery House) tucked away in Prague on a busy main street where they do all kinds of beers including cherry, banana and coffee flavours and some terribly unhealthy but typically Czech snacks such as ‘topínky’ which is toast that’s been grilled in oil and with garlic on top (they even give you the pieces of garlic to rub on the oily surface to make it even more garlic-y!) or spicy sausages in a chilli kind of sauce. 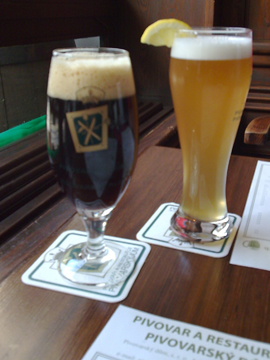 And don’t forget to travel as the Czechs do, on the trams that criss-cross the city.  You’ll get some spectacular views just by taking the 22 tram from the east side of Prague across the bridge and up to the castle.  And if you get off at the stop called ‘Pohřelec’, you can walk down towards the castle, passing a lovely little toy shop along the rows of shops and restaurants on your right and see the gorgeous green statues around the lamps on the castle approach, which are so unique they were featured as a key storyline in a film, so are not to be missed!

Team Parle has 1216 posts and counting. See all posts by Team Parle