Skip to content
Home » [INTERVIEW] Olympian Angelo Taylor: This is Not His First Rodeo

“In running it is man against himself, the cruelest of opponents. The other runners are not the real enemies. His adversary lies within him, in his ability with brain and heart to master himself and his emotions.”
-Glenn Cunningham, 1909-1988, American distance runner and Olympic Medalist

The easiest way to identify the heart of a man is to strip him of his most basic of necessities; oxygen. If you take away a man’s air you will soon be able to see the capacity in which his body is willing to fight. You will be able to observe whether or not his lungs will just fold into a form of surrender or expand into a protest. From the grade school child who is just learning, to the senior citizen still lacing up their spikes; it is this calibration of a fighter that the sport of Track & Field measures every day. Yet, even with all the different athletes emerging on the scene, I do believe it’s safe to say that Angelo Taylor is one of Track & Fields most ruthless of warriors.

After already competing in the 2000, 2004, and 2008 Olympics, Angelo Taylor is making history as the only 400 meter hurdle runner to ever qualify for four Olympic teams. Taylor, 33, has already won gold in both the 2000 and 2008 Olympic Games, and now has his eyes set on returning back to the top of the podium in London. Yet, even with all his training and the excitement of the near approaching Olympics Games at the end of this month, Taylor still managed to take time out of his busy training schedule to answer a few questions for his fans:

Parlé Magazine: What motivated you to make this fourth Olympic team? You already have two gold medals; what is it that keeps you going to practice?
Angelo Taylor: Well, I mean I still have goals I want to accomplish. Winning the two gold medals is awesome but the world record is still out there. I just want to be great, and you don’t become great by resting on medals. I’m the first 400 meter hurdler to ever make it onto four Olympic teams so I’m on the right direction. I just can’t allow myself to let up yet. Also, I do have my kids, my twins, and I really just want to be a good role model for them. I want them to grow up and be proud of all that I’ve accomplished and the legacy I’ve left for them. 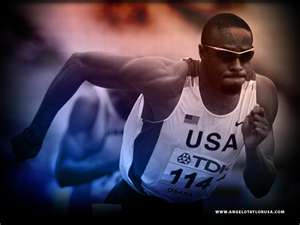 Parlé:  How does this Olympic experience differ from in 2000? What is your mentality this time around?
Angelo Taylor: Well you know the mentality doesn’t really change. You still want to go out there and give it 100% and hopefully come out with the victory. I’m just a lot more experienced now. I mean this isn’t my first rodeo. Back in 2000 I was the ripe age to 21 when I won it. So now at the age of 33 I have just matured mentally as an athlete.

Parlé:  So in the world of Track & Field there are athletes who probably train as much as you, lift as much as you and even have similar foot speed as you. What is it about Angelo Taylor that propels you ahead of the rest?
Angelo Taylor: Well you know it all just comes down to your mental toughness. Track & Field is an extremely mental sport. So yeah, many athletes do the similar workouts and lifting and stuff. But it’s the mental toughness that sets me apart. It’s the mental toughness that distinguishes the champions from everyone else.

Parlé:  Your main event is the 400 meter hurdles which is arguably one of the toughest events in Track & Field. What is it about this event that entices you? You have a strong flat 400 speed; you could easily do well in that. Why did you choose the hurdles?
Angelo Taylor: Back in high school I was blessed at being good at a lot of different events. But I just realized at a young age along with guidance from my high school coach that I could go the furthest in the 400 meter hurdles. It’s kind of like the event chose me rather than me choosing it.  I mean I knew I could run a fast 400 meters flat and that I could hurdle so it really just fit.  Winning the gold at the 2000 Olympics really just solidified it all. That win really let me know the right decision was made.

Parlé:  Unfortunately former teammate Bershawn “Batman” Jackson came up a little short at trials. How confident are you for team USA to continue its 400 meter dominance even with his absence.
Angelo Taylor: I’m very confident. The U.S. really has a great team. We have Kerron Clement returning who took sliver at the 2008 Olympics as well as Michael Tinsley who actually won the trials. So yeah, I feel real confident. The U.S. has a history of being strong at this event, and I really don’t see that changing.

Parlé: So anyone who knows Track & Field knows it’s a life consuming sport. However, what other hobbies or activities might we catch you doing outside of practice?
Angelo Taylor: Man, with Track & Field and training it really takes over your life. So mostly I just try to do things to relax. I mean I’m training 10 months out of the year. So during the summer you might be able to catch me by the pool just relaxing or hanging out with some friends. I also like to go to the movies and check out the latest flick. You know, just anything that allows me to kick back and relax.

Parlé:  So you’re obviously no novice when it comes to the big meets. What sort of rituals do you do to keep yourself calm and focused leading up to the starting line?
Angelo Taylor: I always have those nerves you know, can’t really shake that. But mostly to get myself prepared I try to start mentally. So I always try to visualize myself in the race. I repeatedly go over the race strategy I have going into the race. I also try to watch a good movie before. You know something to ease the nerves.

Parlé:   What advice do you have for a young athlete coming up with dreams of being an Olympian?
Angelo Taylor: My advice for young aspiring Olympians is to work hard and train hard. If you want it go for it. Track & Field is a tough sport. So just keeping pushing at practice and working hard.

Parlé:  What message would you like to send to the rest of the world prepping for London?
Angelo Taylor: My message for the world is that I’ve been training. Again, this is not my first rodeo; I’ve been to this stage before. Most importantly I’ve won at this stage before. So believe me, come August 3rd at the opening rounds of the 400 meter hurdles, I will be ready. Just know that I’m coming.

With that said, we wish Taylor the best of luck at the Olympic Games this year, and have nothing but faith in him as well as the rest of the USA team. Just like Taylor said, “This is not his first rodeo.” So here is our message to the rest of the world: Watch out! This man is on a mission, and he’s not leaving London without gold. If you have something to say about it, take it to the track, in true champion fashion.

Five Fun Facts You May or May Not Have Known About Odell Beckham Jr.