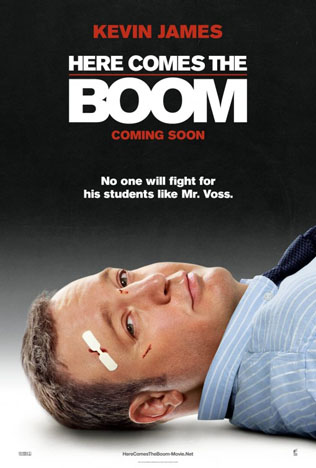 Something about the previews for the new film, Here Comes The Boom, make the movie come off like another cliché flick, landing somewhere between Paul Blart: Mall Cop and Zookeeper on the Kevin James chart. Boom however caught off guard the majority of the packed audience by falling more into the Hitch category of a pleasant surprise. Let’s face it, teacher tries to get girl, teacher tries to save school (in this case the music program), teacher tries to teach children to defy odds—not really a new theme for a film. It still has its moments where it comes off like Disney film, but overall it has its own unique points.

Scott Voss (James) is bored at school dealing with the same routine of teaching biology. His teaching passion is long gone after years in the system. Walking through the school halls he runs into the music room and finds that some of the same students who don’t participate in his room have perfected the art of the musical instrument with the help of their music teacher, Marty (Henry Winkler). We find out a short time later that the music program is being cut because of budget cuts so Voss takes it upon himself to lead the rally to help raise the $48,000 to keep the program alive.

Saving the music is the overall goal, but the laughs along the way keep the movie exciting. Early on Voss takes up teaching a citizenship class to earn extra cash, with a room full of comedians. When the money isn’t coming fast enough he asks one of his students to help him take up mixed martial arts (MMA), after he learns he can make $10,000 for losing.

Throw in a quest for love with the beautiful and age defying Salma Hayek as Bella Flores and you’ve got a full on hit. UFC fighters and announcers make appearances throughout the film, and even though I’ve personally never watched UFC I have a new found respect for the athletes that participate.

The movie which was co-written and produced by James appears to be a subject close to his heart.  He wrestled in college and professional wrestler, Mick Foley, was his teammate.  Retired MMA fighter Bas Rutten, who plays Niko in the film is also a close friend who he trains with.

The overall consensus from everyone watching the film around me was that they didn’t expect the film to be this good. It’s surely one of the sleeper films of the year, and though it probably won’t win any awards it should dominate the box office for at least a week. For music lovers, MMA lovers and comedy lovers this movie won’t disappoint. And if you’re just looking for a feel good story, I think its safe to say you should prepare for The Boom.