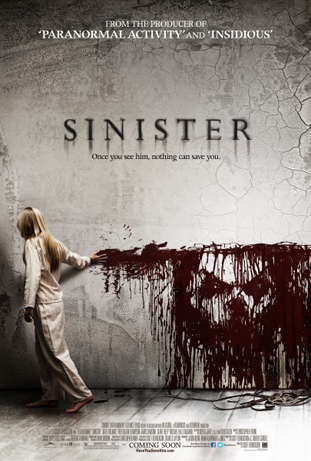 Sinister is a supernatural horror movie about Ellison Oswalt, a true crime writer, who is investigating the death of a family in an attempt to revive his book career. Moving into the house where the family died, Ellison discovers a box of films entitled “Home Movies,” which are reels of stock footage that depict several different families in peaceful serenity and end with the families dying. The key part in each of the films is that one of the children from each of the families is not present. One of the home movies, “Pool Party,” unsettles Ellison when he notices a demonic figure in the pool following the deaths of that family. Making a copy of the image, Ellison inquires of the local police who put him in touch with an occult professor. The professor informs Ellison that the demonic figure is Bughuul, a spirit that eats children’s souls. Through a series of creepy events, Ellison begins to unravel the mystery behind the demonic spirit.

Sinister is a profound film and probably one of the better horror flicks to come around in some time. The issue that Sinister faces is its slow pace. Audiences looking for bloody gore early on will be disappointed as Sinister takes its time to build and because of this loses much of its standing. This was both the director and writer’s intention, seemingly etching the home movie images into the viewer’s mind making each home movie more horrific than the other; especially the one entitled “Lawn Work.”

While Sinister is standard predictable in some parts horror boilerplate, there is an insatiable appetite to go on the hunt with Ellison to find the truth behind the missing children and to discover which of his children will succumb to Bughuul. Sinister serves up some chills and thrills with Bughuul leaping off of the home movies into reality and maneuvering the children whose soul’s he’s eaten for lunch as puppets but there is not much else.

Instead, Sinister provides an enticing look into the paranormal and what lurks behind the demonic veil while sending a message that sometimes mysteries are better left unsolved.