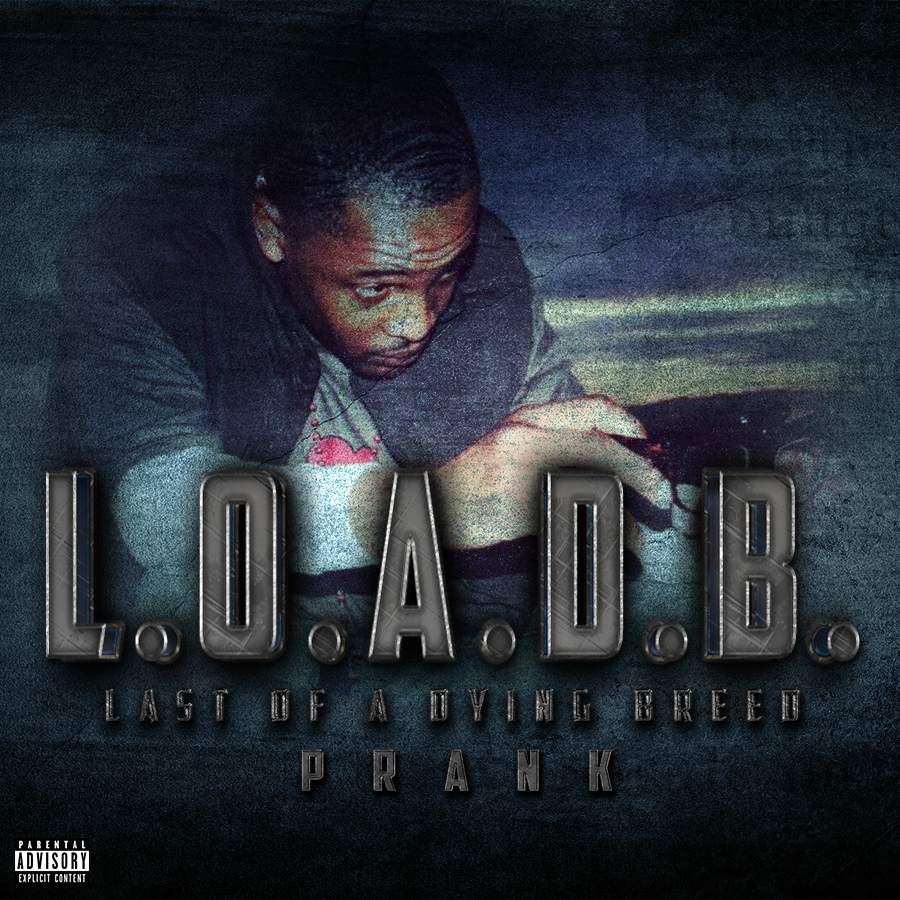 With six solo projects under his belt it would seem that Prank’s lyrical ability, his dedication to the culture and the capacity of his craft is unquestioned. But in that time-honored Hip-Hop tradition of lucid rhythm coupled with intense lyrical delivery, Prank certifies the truth of his claim with L.O.A.D.B (Last of a Dying Breed) and elevates his stature from amateur rapper to seasoned emcee.

Prank approaches each track with a sense of ease and standard of integrity that could only come through much practice, experience and wisdom. The opening track “Don’t Want It” in its brief two minute time frame sets the tone for the mixtape with a simple boom bap beat that is reminiscent of Tupac’s “No More Pain” and is laden with just as much articulated force and meaning. The nostalgia continues with an interlude from the late Tupac himself in which the rapper discusses an array of topics including war, poverty and religion in almost a sermonic form. The issues outlined by Tupac in the interlude are then addressed by Prank on “Why.” The song, both deeply personal and universally appropriate, acts as more of a soliloquy than a monologue as listeners are given access to Prank’s innermost thoughts:

Looking in the mirror thinking what have I become?/Stare at my hands thinking what have I done?/ Why didn’t I run? Why did I choose to stay?/ Questions like what if that shit had went the other way?/ Would I still be here to see my beautiful niece?/Why don’t all my actions match the shit that I preach?/Why do I hate police?/ No, why do they hate me?/Why does it seem that weed is my only therapy?

An even greater asset is Prank’s indelible loyalty to the Bay Area and his rap group, The Diligentz, which is demonstrated in the consistency of these relationships from content to collaboration. On tracks like “Hun Dun” with the help of Bay Area veteran Willie Joe and fellow member of the Diligentz, AkaFrank, Prank unambiguously describes what it means to keep it 100. Willie Joe professes,”in other words they talkin/and me and my niggas live that/ keep it 100, nigga I did that.” This sentiment of realness and friendship is carried through on “Get Mine” in which Prank ardently translates his “I” passions into “we” dreams in an effort to see the success of those he is close to. “Get Mine,” which samples Geto Boys “My Mind Playing Tricks On Me” adds depth to the meaning of the song as it connotes a feeling of delusion as expressed in the sample track; nevertheless, Prank uses the eeriness of the Geto Boys hallucinations as a backdrop to make real a dream that can be attained through unity, confidence, and hard work.

Other tracks like “All Night”, “Bad Bitch”, and “West Side” are Prank’s attempts at being versatile which ultimately pale in comparison to the polished delivery and sincerity of other tracks. “All Night” can be likened to Webbie’s “Gimme That” beauty and the beast fantasy line which may appeal to a select female audience. “Bad Bitch” follows suit but with a number of collaborators on the track has more of a playful and celebratory vibe. Likewise “West Side” is a feel good song utilizing the cadence of Montell Jordan’s hit “This is How We Do It” that could be commercially successful as 2013’s summer anthem.

Much like other Hip-Hop greats such as Nas and Tupac, Prank has demonstrated a mastery of skill and intellect at such an early age that fans and critics alike can only look on in awe at his future. Whether you have followed his career or this is your first listen, Last of a Dying Breed adds another brick to the foundation of lyrical prowess and fortitude that Prank is building.

L.O.A.D.B (Last of a Dying Breed) is available for stream and FREE download at WhoIsPrank.BandCamp.com and www.thizzler.com