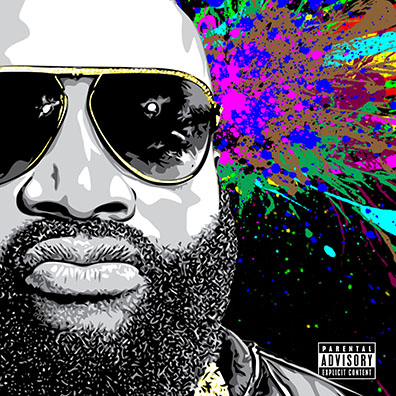 Rick Ross remains one of the most fascinating rappers to listen to. A combination of grandiose loftiness with an inclination toward the finer things in life, intertwined with the grit of where he came from, Ross’ lyrics always manage to stampede their way into the speakers. On Mastermind, Ross is perhaps his most rumbly and brazen if that’s even possible. The flair of many of his previous albums is absent, the gloss is gone from the Ross so to speak; but that does not detract nor take away from the gems found within this collection.

“Rich Is Gangsta,” on first listen emanates as a leftover from Teflon Don. Ross, however, quickly pulverizes that thought and makes the album worth listening to – not so much because you want to hear what he has to say, but because his lyrical aesthetic can’t be denied no matter how hard one tries. “Nobody” is a reflective cut on the gripping realities of street life. It has some of the best lines Ross has ever uttered further adding depth to Mastermind.

The first single “Devil Is A Lie,” provides a formidable sound that is brash and will have you turning the volume up. Paired with Jay-Z, it is one of the aforementioned takeaways. “War Ready,” which features Young Jeezy gives the album an affinity for theatrical effect. Ross wants you to examine him from a different perspective – one of cutting hubris and tactless versification. This outlook on Ross is also unmistakably evident on “BLK & WHT,” and “In Vein.” The former being an introspective glorification and rumination that possesses a kind of strange quality and the latter featuring The Weeknd, in a kind of follow-up to some of Ross’ wine and dine, moscato and strawberries type recordings.

“Sanctified” visits the church – with Ross, Big Sean and Kanye on one track emphatically expressing their diverse rhyming skills with a beat that feels to be nothing but looped synths, drums and a massage of a gong whereas “Thug Cry,” the finale, retraces steps walked earlier in the album, but is well-produced and quite possibly one of Ross’ best tracks ever.

Despite controversy, Ross continues to create albums that further cement him as a weighty rapper who understands his strengths and limitations. Mastermind is no Port of Miami, and no Deeper Than Rap but it doesn’t have to be. At this point, Ross isn’t trying to impress fans, only seemingly trying to continue being one of the most prolific rappers in the game.

[FIRST LOOK] Meet the Cast of All American: Homecoming Season 2 on CW