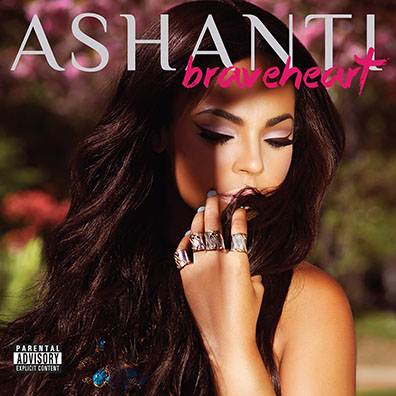 Songstress and industry veteran, Ashanti is back with her first album since 2008’s The Declaration. After the extended delay, the new album, Braveheart is almost surprisingly solid. Almost because it’s easy to forget that Ashanti has a catalog full of hit songs and a history of putting out some pretty good music. While Declaration wasn’t her best work and the single, “Good Good” left a slightly bad taste for fans and supporters, her return here is precise and well thought out. With a new team and a new label, Written Entertainment, in place, this fresh start is just what she needed to remind listeners of the quality of music she is capable of putting together.

The album starts with a somewhat epic build up, channeling the album’s namesake, the film which looked at the will to fight. The song is falls short of the goal, as the chorus appears lazy, reminiscent of the aforementioned, “Good Good.” The songwriting and vocal talent true fans are accustomed to from early Ashanti albums quickly returns on the next couple tracks as she sings of love and heartbreak on “No Where” and “Runaway.” The project only gets better from there.

“Count” and “Early In The Morning” are where listeners may miss the Murder Inc. family the most. Can’t help but think that the Detail produced “Count” would be perfected with some added production elements from Irv Gotti and 7 Aurelius. And while French Montana assists on the latter track, a Ja Rule verse would provide chills in just the right spot. Nonetheless, the tracks help keep the album flowing in the right direction as Ashanti continues the set the tone for where she wants to go.

“Love Games,” which features Jeremih, is one of tbe album’s standout tracks. A slow groove with a light 808, the duet plays perfectly into the melody. The two singers make for an impressive collaboration.

The first single, “Never Should Have,” has a slight pop feel, similar to something you would find on a Rihanna album. It looks at the underlying dangers of giving away love, particularly for someone who isn’t fully prepared to commit to all that love has to offer. The Rick Ross assisted “I Got It” is the follow-up single. Unlike most of the album it contains a much more Hip-hop edge. Ross brings out the confident swagger she needs to compel over the beat and it helps smooth over the reggae infused close out track, “First Real Love.”

Those who purchase the Target deluxe version won’t be disappointed at all, considering “Bonafide Survivor” is the most powerful song on the entire project. It says everything you can imagine she’s wanted to say for some time now about where she is in the business at this point. Produced by Warryn Campbell, it’s no wonder it exudes honesty and realism. The track is worth multiple listens. “RIP” provides a positive overall ending, with something to look forward to. Ashanti is back and the excitement to hear new music remains for eager fans. No surprise when it’s all said and done, just a reminder of what was and what will hopefully continue to be.