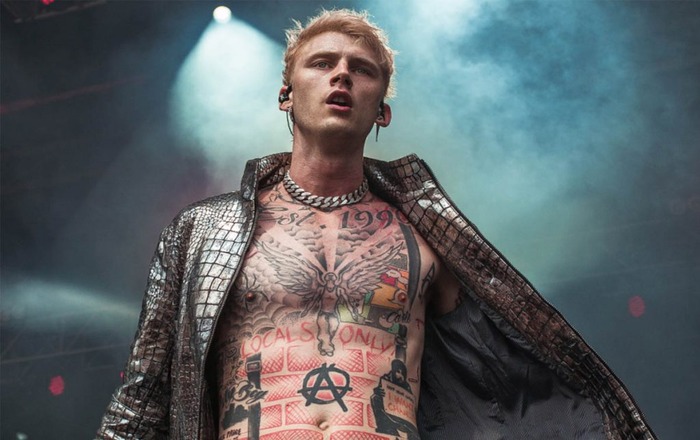 If you weren’t aware, MGK (Machine Gun Kelly) and Michael B. Jordan live next door to one another. One time, MGK actually had to go over to Mike’s home and borrow a baking sheet in order to bake his fiancée, Megan Fox, a stack of coconut-free, gluten-free, cinnamon rolls.

On Wednesday, MGK told Jimmy Kimmel on his show “Jimmy Kimmel Live,” that his “homeliness” is something he’s attempting to get better at since moving in with Megan Fox and getting engaged her, including “learning how to cook for her.” Due to the actress’ dietary constraints, the Drunk Face rapper disclosed, it’s been very challenging. Once, Fox told MGK she desired cinnamon rolls, thereby, the artist ventured on making “this huge commitment of cinnamon rolls,” he said.

First, he ran to the store to purchase the ingredients. MGK said, “Then I get to the part in the instructions where they’re like ‘put them on a baking sheet,’ and we just moved into this new house, and I didn’t get baking sheets.” He went on: “And so I go, like, ‘Aw man! I don’t have a baking sheet!’ I’m trying to think of who my neighbors are and we just discovered a new neighbor of ours.” The alternative rocker said he and Fox had “heard music one day” playing very loud from across the street, so the two elected to go over and knock on door — and Michael B. Jordan opened up, wearing a bathing suit, doused in sweat.

MGK told Kimmel, “That popped into my head and I was like ‘Oh, I should just hit Michael B. Jordan up and ask for a baking sheet.'” He said he called the Fruitvale Station star, who didn’t take his call, but Michael texted him back to inform that he was not home, however someone was there, thus, he should walk over and retrieve a baking sheet if necessitated. After following Jordan’s instructions, the cinnamon rolls ultimately got baked and Fox loved them.

MGK admitted that he ended up tossing the cinnamon rolls in the trash because he felt they tasted horrible. “Still, to this day, like, any time someone brings up, even if they start the word ‘cinnamon,’ I’m like ‘shh!'” He added Megan is “still upset” with him about the incident.