Our interview with 112’s Q Parker, now standing on his own

Room 112 is where the players dwell. Lyrics said by the late great Notorious B.I.G, shows the longevity that Q Parker has in the music industry. One fourth of the legendary R & B group, 112, Q Parker is setting out on a solo career following the paths of Slim and Mike who have already released solo albums. Releasing a mixtape, his second annual fitness calendar and biding in the waters of the drowning R & B genre are all on the Q Parker agenda.  First up however, is the release of his debut single “Show You How,” which recently had its video premiere on 106 & Park.  Sitting on the 8th floor of the Marriot Hotel in Times Square, Q Parker is ready to talk about a possible 112 reunion tour, his fitness calendar, and his upcoming solo album, The MANual.

Parlé Magazine:  What have you been up to since fans have last seen you?
Q Parker:  I’ve been up to a lot of things, I just finished my first solo album, and it’s called, The MANual. We chose to spell it that way because we wanted to show the public who, Q Parker,  the man is. I feel like my music is a how-to guide to women on how they should be treated in my opinion. I did the Q Parker fitness calendar for 2012 and I’ve just been promoting everything that I have done.

Parlé: How did you start the calendar?
Q Parker: My manager and I had a conversation where we talked about branding me as an individual. Everybody that knows me knows that I’m into health and fitness, being health conscious and being in shape and we decided to do a fitness calendar.

Parlé:  You recently signed a deal with Malaco, how did that come along?
Q Parker: I signed myself to my own production company, then I did a partnership with my company and Malaco. I didn’t want to go back into the major system, I wanted to remain an independent artist so to the point where I have the creative control and I’m not just viewed as an artist but also as an executive.

Parlé:  You’ve also been songwriting–
Q Parker: Writing has always been something that I have been a part of even with all of the 112 hits. I wrote for Faith Evans, Total, Aaliyah, Ma$e, Gina Thompson, Isley Brothers and Tevin Campbell. I always felt with being an artist who is better to tell your story than you as an individual. So a lot of my records come from me and I try to come from a genuine place when I’m writing my music. 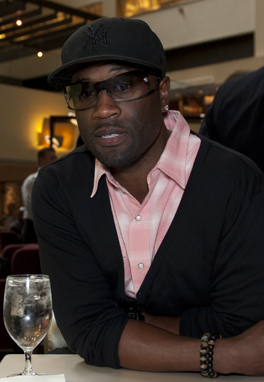 Parlé:  What do you think is better the business side or the music side?
Q Parker:  From an artist standpoint, the music because it’s in me, I do that in my sleep. But now I had to adjust to being a veteran in the game so the business side is over the music. In my journey I have to be fully equipped to make business decisions because the music comes naturally.

Parlé:   What’s up with 112 these days?   You are legends in the game, any plans for a new group project?
Q Parker:  We’re all supportive of each other’s career and we’re in talks of putting together a summer tour. We’re doing our individual things but we’re in talks.

Parlé:  No album?
Q Parker: No album just yet, you got to get it started first so we’re starting by doing performances.

Parlé:  Are you still cool with anyone from Bad Boy?
Q Parker: I’ve always been the type of person that value relationships. That is how my manager became my manager, she first was working at Def Jam and we maintained a friendship and I called her when I decided to do the solo album. Had I not maintained that relationship the call may not have went in my favor. I still do talk to the old Bad Boy staff and Def Jam staff.

Parlé: That’s good to hear.  Let’s get back to the MANual, what can we expect from your solo debut?
Q Parker:  I’m an R & B dude and I think my mission is to make music for women. I believe women need a go-to guy. Someone who is going to talk to them, comfort them, be open and not afraid to show some sensitivities. I think I was able to accomplish that on the album and being one of the go-to guys that women look to when they look to male artists. I believe in substance and actually singing about something.

Parlé: Who did you work with on the album?
Q Parker: On the production side, I worked with Chuck Harmony, Kendrick Dean, The Corner Boys, Warryn Campbell, Ivan and Carvin, and Antoine Hart. I wrote the majority of the album but I did some writing collaborations with Crystal Johnson.

Parlé:  Any features?
Q Parker:  Crystal Renee and a duet with Faith Evans.

Parlé: You released a video for the single, “Show You How” with Olivia and Willie Taylor of Day 26 guest starring, what was the concept behind the video?
Q Parker: Being that everything is so visual nowadays, I wanted to align myself with people that were recognizable and I can pick up the phone and ask for a favor. The video came from a sensitive place and I think it really compliments the song and stays true to the song.

Parlé: How have you stayed true to yourself after 16 years in the music industry?
Q Parker: Having good people around has helped because they kept me leveled. It was about knowing who I was and what I was going to be. No matter where I go and what I do. I still have certain values that allow me to go but so far.

Parlé:  What do you think about the state of R & B right now?
Q Parker:  I’m all about change and adjusting but I also believe some form of you should stay consistent. I believe R & B took such a decline because the core artists started to look to other genres and started to take the R & B out of the music. I always give credit to John Legend and Alicia Keys because they say no matter what’s going on, I’m going to do me and be me. That is what I’m doing for myself. I want to be a staple for R&B.

Parlé: What can we expect from you for the next few months?
Q Parker: I trying to be visible and keep flooding the industry with content. We’re in the digital age so one of the keys is to keep flooding. In reality people move on so we have been staying in the view. I have been covering songs with my own spin on it and releasing them on YouTube. I’ve been doing webisodes detailing my day and making of the album.

Parlé: Thanks for the time, look forward to the album.